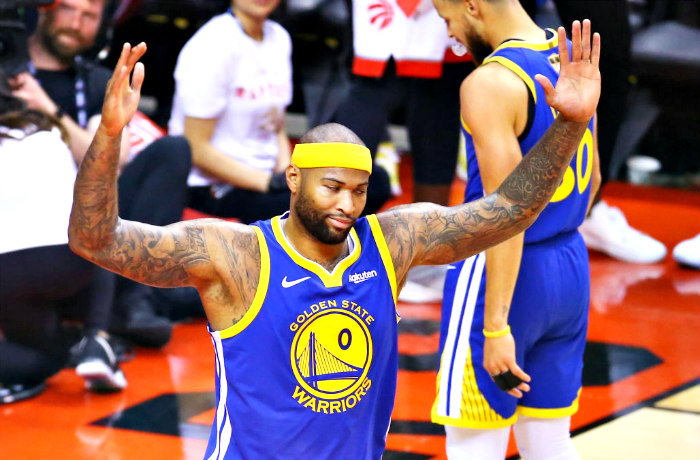 The best-of-seven NBA Finals has now been reduced to a five-game series after the Golden State Warriors tied it up 1-1 in Game 2. The defending champions will have the home court advantage in Game 3 as they host the Toronto Raptors at Oracle Arena on Wednesday night.

Despite making their stand for a 2-1 series lead on home soil, the Warriors will be on the back foot for this game. Injuries have plagued the team in the playoffs. They’ve been playing without Kevin Durant who has been sidelined with a strained calf injury. They also recently lost Kevon Looney for the remainder of the season with a fractured collar bone. Andre Iguodala has been effective for them but he’s been playing hobbled by a leg injury of his own, but has been gutting it out, like the true champion that he is. The question is, how much longer can his 34-year-old body hold up against the physical defense of the Raptors? As it stands, Klay Thompson is also listed as questionable for Game 3 after straining his hamstring in Game 2. Thompson did tell reporters recently that he will be a game-time call in the pivotal Game 3 and that the decision on whether he will play or not will be left to the trainers who will assess the risk of his aggravating his injury.

With all of these players sidelined or slowed down with a plethora of injuries, and with Kawhi Leonard playing out his mind lately, where will the Warriors find the weapons to out-gun the Canadian franchise in a series that has clearly gone down the road of attrition.

The Warriors will be looking to reserves Andrew Bogut and Quinn Cook to step up in a big way. They won’t be enough to match-up against the likes of Kyle Lowry and Marc Gasol.

The answer is DeMarcus Cousins. At least the Warriors hope he is. His narrative is ripe for the perfect hero moment. In 2017-18 Cousins, who was then playing for the New Orleans Pelicans, had to undergo season-ending surgery to repair a ruptured Achilles. He was offered a two-year deal worth $40 million. He turned it down to chase a title with the Warriors and signed for a fraction of that amount – $5,337,000 on a one-year deal. At that price, the Warriors felt they were getting a bargain, a former top-3 center in the league who just needed to get his legs back underneath him while rehabbing his way back to 100 percent health. He was pretty much a rental, an insurance policy on the cheap for the playoffs, the NBA Finals. It looks like the Warriors need to cash in that chit here and now.

In 2018-19 Cousins missed half of the regular season as he slowly worked his way back into form, eventually ramping up his activity post-All-Star break. Unfortunately for Cousins, the injury bug struck again, this time stinging during the Warriors’ Game 2 vs. the Clippers. The big man suffered a partially torn left quadricep after tumbling for a loose ball. His ability to return this season were suspect at best. Almost miraculously, he managed to get back on the court for Game 1 of the NBA Finals. DMC had an inauspicious performance with just three points to his name in eight minutes of action.

Game 2 showed us a different Cousins. He double-doubled with 11 points, 10 rebounds and six assists in 28 minutes. He says he’s now ready to log heavy minutes. At this point, the Warriors may not have much of choice but to do just that. Outside of Stephen Curry and Klay Thompson, Cousins could just be that extra weapon to provide a different kind of firepower that will open things up on offense for them. Mind you, this is a guy who averaged no less than 22 points per game for the last five seasons prior to his Achilles injury. He has the tools. He just needs to bring a shade of his old game and the Raptors will have to contain a monster in the paint.

In Game 2 the Raptors stifled Stephen Curry and the rest of the Warriors’ wings with a box-and-one defensive scheme. The same trick won’t work as well if Cousins can make his presence felt in the paint, posting up against Marc Gasol and Pascal Siakam.

Cousins now has a chance to write an impressive chapter in his NBA career and possibly earn himself a big payday in the off-season. He came to the Warriors for a championship, but now it appears that the onus will be on him to earn it with blood, sweat and tears as the Raptors will attack them as a pack and give them no quarter. For sure, there is no question, Cousins will be an X-factor of almost incalculable impact on the series. Is he up for the task? That’s the big question for Game 3.