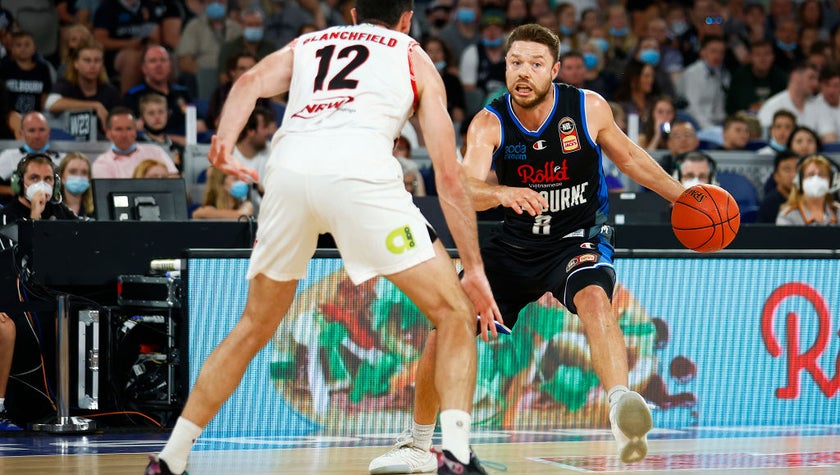 The Perth Wildcats had the spur of a 400th game for their captain, but Melbourne United wasn’t about to drop a third straight game and, after falling down 15 points early, dominated and eventually held off their determined opponents for the 93-87 win on Saturday night.

It was the first game between the two teams since Melbourne beat the injury-played Perth in last year’s Grand Final series. To say it was a chance for both to make a statement at John Cain Arena would be a tremendous understatement.

The Wildcats had the added edge of Jesse Wagstaff becoming the second player in the club’s rich history to reach 400 games, but United was coming off two tough losses following an eight-game winning run.

Perth then went on a tear to open the game. Mitch Norton was the early spark on his way to eight first-quarter points, Bryce Cotton joined him for ten, and the lead was out to as much as 15.

Chris Goulding was scoreless to quarter-time, but he responded with 16 points in the second period. Melbourne scored 37 as a team, including a late 15-0 run to suddenly turn up five going into half-time.

Another 21-3 run in the third quarter saw the lead balloon out to 23, and United appeared to be cruising until Perth made another charge.

Inspired by Mitch Norton and Todd Blanchfield and another couple of threes from Bryce Cotton, Perth got back as close as six, but Matthew Dellavedova had 11 of his 18 points in the fourth term to ensure United held on.

It was another monster performance from Jo Lual-Acuil with 22 points, 13 rebounds, and three blocks for Melbourne, while all of Chris Goulding’s 16 points came in the second term. Caleb Agada added 15 points and 13 rebounds, and Shea Ili 11 points.

United coach Dean Vickerman was happy enough with the response from the last two losses but still sees room for improvement despite now sitting back atop the standings.

“We’ve got some crazy high IQ guys on this team, and they figured it out. Delly put Chris in some screening action, and that was smart for us,” Vickerman said.

“We knew with (Matt) Hodgson not playing and Majok only playing about 16 minutes for them, we recognized that Jo had advantages when they went small, and there were other advantages in the post we didn’t quite see throughout the night.

“There were improvement areas there, and we needed a win, and we’ll take a win against Perth however we get it. There was some high-level basketball, and it was great to see what we regard as United basketball, but there were areas we’ve got to still improve on.”

Cotton put up 31 points for the Wildcats, with Norton adding 21 and Vic Law 10 to go with ten rebounds, three assists, and two blocks.

Wildcats coach Scott Morrison wasn’t happy to give up 63 points to 32 across the second and third quarters but felt their change in the defensive scheme in the fourth helped, at least for a while.

“I think we let ourselves down in the second and third quarter by not trusting each other on defense and forcing it a little bit offensively,” Morrison said.

“I couldn’t tell you the last time I called for a box-and-one at any level, but I felt like we needed to try something different. We put Kevin White in the game after he hadn’t played the last couple of games, and I thought he gave us great energy.

“We were just trying to shift the momentum a little bit, but they started to dice it up pretty good later in the quarter, but it did help us get back in the game.”

Vic Law opened up the game with a triple for Perth, and when Mitch Norton went on his own run of six straight points, the visitors were quickly on top 11-4, and that was before Bryce Cotton got going.

Cotton would end up putting up ten opening quarter points, and Norton eight with that backcourt combining for 18 with Matthew Dellavedova and Goulding just two for Melbourne opposed to them.

Perth also didn’t turn the ball over once in the opening quarter to lead by as much as 15 and still 29-16 by quarter-time.

Goulding quickly got off his donut, hitting a three to start the second quarter but still an and-one for Cotton, three more free throws for him, and then a triple from Michael Frazier saw Perth maintain the 12-point edge.

Melbourne was warming to the task better, though, including forcing the ‘Cats into four turnovers for the quarter, and eventually, they took advantage. Jo Lual-Acuil was huge in bringing the margin to single figures, and then United went on a 15-0 run to go from nine down to six up.

That included a three to Goulding and two back-to-back bombs from Shea Ili, and Melbourne was still up 53-48 by half-time.

Lual-Acuil threw down another couple of dunks to start the second half, and his presence inside was something Perth could do nothing about without the suspended Matt Hodgson.

Caleb Agada’s confidence was growing to drive and finish inside, too and then Melbourne went on a 13-0 run capped by a triple from Dellavedova to break the game open.

They led by 23 points and still 79-61 by three quarter-time, but you just knew the Wildcats weren’t done with yet.

Norton and Todd Blanchfield sparked them, combining for 11 points before Cotton helped out with a three to bring the margin under single figures.

Perth kept coming, but it was Dellavedova who came up with a crucial basket just to hold them out. He had 11 fourth-quarter points, and Melbourne held on to win by six.

This was the only game for both teams in Round 11, with Melbourne next in action on Thursday in a Throwdown with the South East Melbourne Phoenix. The Wildcats face the Kings in Sydney on Saturday.