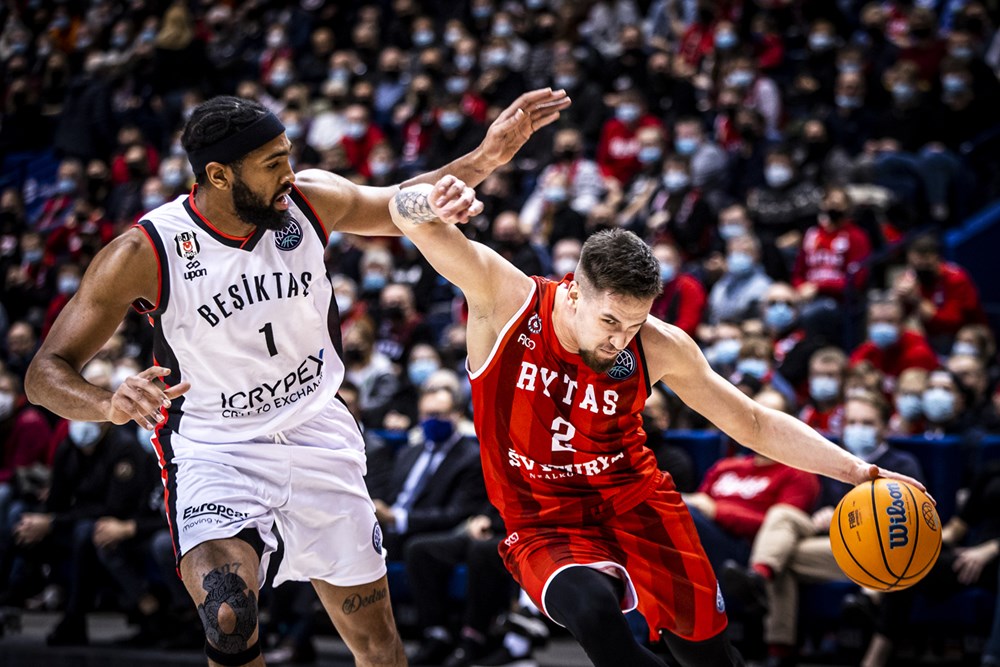 A five-game Wednesday was always going to be full of content. One point game in Hungary, double overtime in Romania, amazing fans in Lithuania, signs of better days in Russia, and a sweep in Germany all happened within five hours of basketball.

With defeats to Treviso and Holon, BAXI Manresa remains the only unbeaten team in the FIBA Basketball Champions League.

Town of Treviso has been waiting for a team in a continental event for nine years, and Nutribullet Treviso came in rushing through the door, blowing by VEF Riga, AEK, and Falco Szombathely to start the Regular Season with a perfect 3-0 record.

With AEK defeating VEF Riga, both teams were tied at 1-3, which meant Treviso had a huge opportunity to book a ticket to the Round of 16 with a win in Hungary. But Falco Szombathely had their own math in here.

The first matchup ended with an eight-point win for Treviso and up five with two minutes to play. It seemed that the Hungarian champions could get to that margin and claim the tiebreaker in a 3-1 tie.

However, Tomas Dimsa had a monster performance to close the game out, a big triple, a big dunk to get the lead, and a couple of free throws to tie the game at 80-all with 15 seconds to play.

But Dimsa and Treviso had a lesson to learn on Wednesday. There can be only one hero in Szombathely – Falco’s do-it-all leader Zoltan Perl, a Szombathely native. He matched each of Dimsa’s big-time moves late in the game, and once Treviso decided to foul at 80-all, he made one free throw to win the game.

Dimsa had one final chance to win it, but his layup bounced around and dropped out at the buzzer. Final score 81-80 Falco Szombathely, but the fact that Treviso fouled so late clearly showed they didn’t mind losing by one – they are still leading the group at 3-1.

Falco needs to have one win more than Treviso over the last two Gamedays to win the group.

Perl had 18 points to lead the way for Milos Konakov. Nicola Akele scored 22 for Treviso, Dimsa finished with 16. If they waited for 12 years to get the town back into European competitions, they could wait another month to book a Round of 16 ticket here.

U-BT Cluj Napoca and Hapoel U-NET Holon played out a game for the ages. As if double overtime was not enough, Guy Pnini and Patrick Richard put on a gunfight that would’ve made Clint Eastwood and John Wayne proud.

Pnini hit back-to-back three-pointers late in the fourth quarter, including the one that gave Holon a four-point lead with 48.8 left to play.

Holon also had possession while being up by three points with 13.9 left to play, but they threw the baseline out-of-bounds pass straight into Romanian champions’ hands. Patrick Richard wasted no time, knocked down a pullup three to send the game to OT at 83-all.

It didn’t end there. Pnini had another monster three-pointer to give Holon another three-point lead late in the overtime, meaning all three of his deep bombs came with the game on the line.

The stage lights were back on Richard – and the Cluj sniper delivered. The “Butler” set from the sideline out of bounds, Richard ended up on the receiving end of both a strong Andrija Stipanovic screen and a perfectly timed Karel Guzman assist to make another triple and send the game to double overtime at 94-all!

There could’ve been another twist to the story as Fred Bourdillon made a triple to cut Holon’s deficit to 102-100 with 30 seconds to play in the second overtime, but after a turnover by the home team, Guy Pnini could not end his night on a high – he went 1-of-2 from the line, Cluj staying in front by one, and staying calm from the line to seal the deal.

Steven Gray even got a good look to force third OT, but it went in and out, allowing the hosts to set the final score at 106-101.

Stipanovic was the top scorer for U-BT Cluj Napoca with 29 points, Brandon Brown scored 20 with eight assists, Patrick Richard was two assists and two rebounds away from a triple-double with 17 points. The Romanian champions are up to 3-1, taking the lead in the group.

Niv Misgav had 19 points for Holon, who had seven players in double figures. They are unbeaten no more but still in an excellent position to win the group with a 2-1 record and the tiebreaker over Cluj.

Coach Zoran Lukic said he wished Nizhny Novgorod never made it to overtime in Greece because instead of losing by one or two, they lost by nine points in the first matchup with Lavrio Megabolt.

But Lukic obviously had an ace in a hole because his boys not only got their first win of the season, they also stayed alive by erasing the nine-point deficit from game one, winning 74-62 in Russia.

It was still anybody’s game at 62-58 midway through the fourth quarter. That’s where two key stats went Nizhny Novgorod’s way – offensive rebounds and second-chance points. First, it was Rolands Freimanis to make it 64-58 after his own board, then Pavel Antipov knocked down a triple, and Sergey Toropov added another from the same spot after an Antipov offensive board.

Just like that, Lavrio was in panic mode, and Nizhny opened up a double-digit lead, escaping from a possible two-game deficit against everybody else in the group, claiming the tiebreaker in case of a tie with Lavrio Megabolt at the end of Gameday 6.

They had 19 offensive rebounds and won the second-chance points 22-2, more than enough to sail to a win even with 18 turnovers.

There have been some amazing atmospheres throughout this season, and it’s time to put Vilnius in contention for the best fans of the League. Standing ovation saw Rytas Vilnius finish off Besiktas Icrypex in an 82-69 win to send both teams to 2-2.

Rytas will be in front of Besiktas if the two remain tied at the end of Gameday 6 since they erased their 3-point deficit from the reverse fixture.

Ivan Buva had 27 points in 24 minutes of work. Four other Rytas players were in double figures, including Gytis Radzevicius, who had an 11-point, 11-rebound double-double.

Rondae Hollis-Jefferson had 26 points for Besiktas, including a memorable dunk in front of the Rytas fans.

Hereda San Pablo Burgos ended their relationship with Zan Tabak before this week’s game, but Felix Alonso and Fran Hernandez still found a way to get the defending champs on top of the standings in Group H.

With Rytas and Besiktas getting to 2-2, Burgos knew that they would go top of the group with a win in Germany and switched through gears in the final quarter to win it 30-17 and win the game 85-72.

Dani Diez had 21 points for Burgos, Julian Gamble kept his fine form in the new club with 17 points in 19 minutes, Vitor Benite knocked down clutch shots for 16 points on the night.

Tai Odiase and Phil Pressey scored 14 each for Oldenburg, but the German side drops to 1-3 on their BCL return.