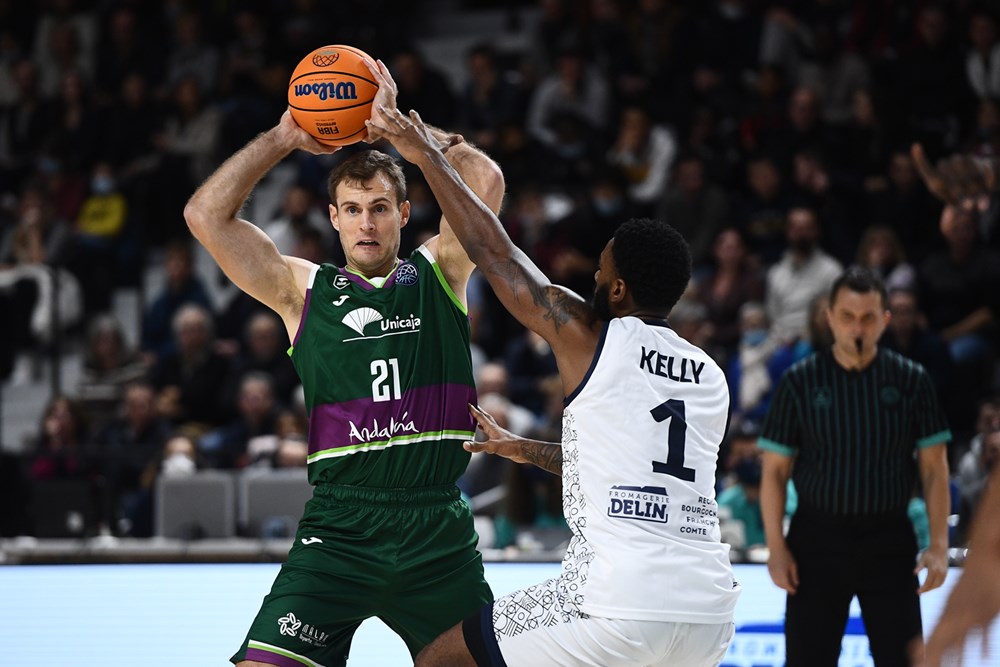 DA Dijon and Happy Casa Brindisi were off to slow starts by their standards in the Basketball Champions League. Both teams picked up big momentum wins at home on Tuesday, over Unicaja and Darussafaka, respectively.

Both teams enjoyed strong support from the stands, with a packed arena guiding Dijon to an early lead over Spanish juggernauts, while Brindisi’s famous balcony tribunes almost fell off from the loudness of the crowd in the closing minutes against Darussafaka.

Just two weeks ago, Unicaja blew out JDA Dijon by 29 points in Spain. But coach Nenad Markovic kept that “embarrassing loss,” as he called it, in the back of his head, as JDA Dijon came out with a monster first half against Unicaja to take a 47-32 lead at the break.

David Holston was the brain behind all the offensive schemes for the French squad. Unicaja tried backing off of him, so he made an early three-pointer. Unicaja tried getting closer; he was crossing up his defenders and getting the layups.

The happiest man about Holston’s elite first half? Gavin Ware. The big man scored 20 points in the first half alone, six of his ten field goals coming from Holston’s assists.

Holston himself had 16 points and six assists before the break, proving once again he is an elite point guard and still makes a lot of difference at 35 years of age.

Unicaja bounced back after the break by keeping Holston out of the game. Dario Brizuela drew his 4th foul early in the third quarter and knocked down one of Unicaja’s three triples in the period to cut the gap back to single digits.

However, Dijon kept getting to the painted area with ease, establishing a 32-10 dominance in that zone over the first 30 minutes, taking a 60-49 lead to the fourth quarter.

Just by holding Unicaja at bay with Holston sitting, this game felt like it could only go Dijon’s way. Once the star point guard stepped back in to start the fourth, Dijon was rolling again, playing their best basketball since coach Markovic took over.

It finished 78-68, with 19 points and nine assists from Holston in just 27 minutes of work. Gavin Ware stayed at 20 he had at the half, Abdoulaye Loum and Jacques Alingue took over his paint duties in the second half, getting to 28 points combined.

The French team climbs to 2-2 in the group, while Unicaja drops to 3-1. Dario Brizuela scored 17 off the bench for coach Fotios Katsikaris.

Happy Casa Brindisi and Darussafaka played a close game in Istanbul, Darussafaka closing the game out stronger and finding a six-point win. No team could open up a lead bigger than nine points in that game, and teams kept going back and forth throughout 40 minutes in Turkey.

In Italy, the crowd saw one of the most spectacular shots of the season. Don’t ask why; just enjoy what Nick Perkins was able to do for his first three-pointer of the season.

The score at the half said 43-41 Darussafaka, the guests putting up impressive 27 points in the second quarter. It turns out, Brindisi coach Frank Vitucci’s talk in the home team locker room was even more impressive.

A different Brindisi came out of the tunnel, not looking like a 0-3 team at all, more like the 6-2 team from the Italian League, a team with the second-best record in the country.

Brindisi went from defense to offense all game long and opened up a 61-51 lead by holding Dacka to 8 points in the third and claiming a 15-3 lead in fast-break points before the fourth quarter even started.

“We had 20-something turnovers, which led to 25 points for them, easy baskets, a lot of fast breakpoints… The turnovers killed us,” Darussafaka’s Isaiah Pineiro pointed out the same stat after the game.

But the Turkish side did find their way back into the game by pressing full court in the fourth. It looked like they were en route for a massive comeback as McCullough made the and-one layup after a forced turnover, which cut their deficit to 73-69 with just two minutes left on the game clock.

It wasn’t to be – the fact that McCullough missed the additional free throw was an omen for Darussafaka. They also missed a three-pointer that could’ve gotten them to -1 and instead saw their 6-point lead from the first matchup evaporate over the last 90 seconds.

Pressing full court is risky because of long passes. One of those full-court throws ended up as a touchdown pass, Nathan Adrian as the quarterback, Josh Perkins as the wide receiver, with a foul, too, getting Brindisi’s lead to 76-69.

Another empty possession by Darussafaka led to a Josh Perkins defensive rebound, and he was immediately fouled, pushing the gap to 78-69. Now, the road team was in panic mode, and they couldn’t even get to the six-point gap the rest of the way.

Brindisi’s first win of the season, 82-73, exactly three points better than their 82-76 defeat in Turkey. All of a sudden, they are in a good position to advance to the Play-In.

McCullough counted to 22 for Darussafaka, but they drop to 1-2 now.

Holon and Cluj are just a win away.