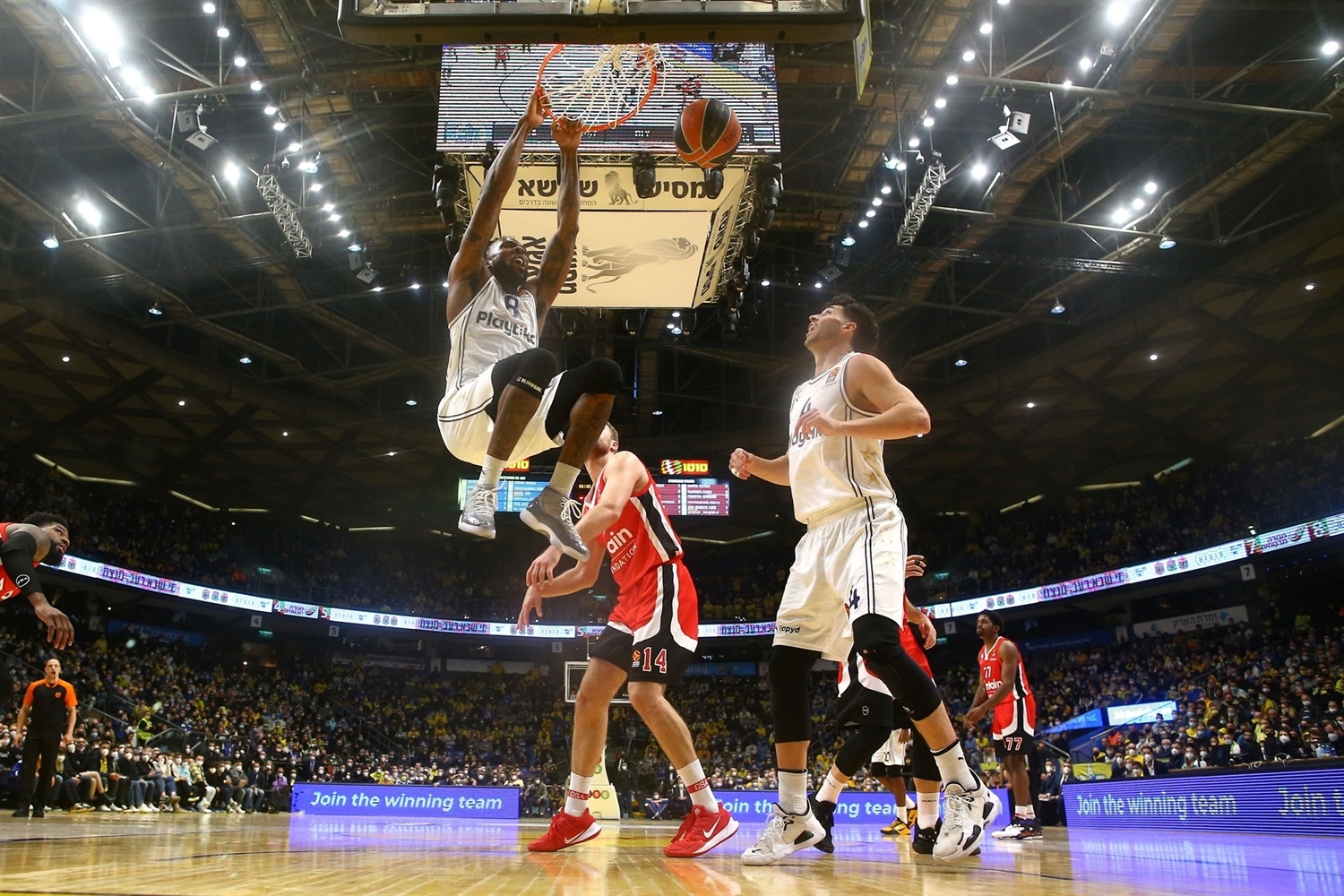 The results in the first night of Round 22 action shook up the top of the standings. Real Madrid blasted ALBA in the German capital to match Barcelona with 16 wins after the latter fell at UNICS. That result also lifted UNICS into a four-way tie for third at 12-7. Two other teams in that tie, Olympiacos,, and Zenit, lost Thursday. Maccabi ended its eight-game losing streak by beating the Reds, and Monaco recorded its fourth straight win by beating Zenit on the road. Fenerbahce erased a 17-point deficit to beat Zalgiris. Action resumes with four Friday fixtures, including CSKA facing Milan.

UNICS Kazan collected its first victory in history over FC Barcelona by prevailing 70-64 at home in a defensive slugfest. Despite having its last three games postponed, UNICS saw Lorenzo Brown score 22 points with eight assists, and John Brown added 20 points, and seven steals while Mario Hezonja chipped in 11 points and 11 rebounds to move to 12-7, including 11 wins in the last 14 games. Barcelona used a 2-14 run to lead 17-24 midway through the second quarter, and the guests remained ahead until midway through the third quarter when UNICS reeled off 12 straight points to lead by six points. The hosts kept up the defensive pressure and built the lead to 10 points in the closing minutes to get the win after famously wasting a 15-point lead and losing in overtime in Spain. Barcelona, for its part, welcomed back Nick Calathes but did not have the services of Nikola Mirotic in dropping its third game in the last four for a 17-5 record. Cory Higgins scored 17 points, and Brandon Higgins picked up 16 points, but no other Barcelona players scored more than 8 points.

AS Monaco recorded its fourth consecutive victory on Thursday by defeating Zenit St Petersburg 77-86 at Sibur Arena. Mike James led the way with 21 points and five assists, Dwayne Bacon added 20 points, and Donatas Motiejunas posted 16 points and eight rebounds to lead Monaco, which improved to 9-11 on the season. Zenit, which trailed for all but a few seconds in the second quarter, could not overcome the absences of Arturas Gudaitis and Conner Frankamp and fell to 12-7. Jordan Mickey was Zenit’s top scorer with 18 points and five blocks, Dmitry Kulagin and Mindaugas Kuzminskas added 12 points apiece, and Sergey Karasev scored 10 in defeat.

On Thursday night, Fenerbahce Beko Istanbul erased a 17-point third-quarter deficit before defeating visiting Zalgiris Kaunas 73-67 at Ulker Sports and Event Hall. The hosts trailed for 37 minutes but never gave up and capped their rally with a 14-2 run in the last 4 minutes to get the win and improve their record to 9-10. Marko Guduric led the way with 19 points, four rebounds, five assists, and three steals for a PIR of 27, his best this season. He found great help from teammates Shemus Hazel, who scored all of his 13 points in the second half, and Achille Polonara, who had 10 points, eight rebounds, and four assists. Edgaras Ulanovas set the tone for the visitors with 16 points and seven rebounds, Karolis Lukosiunas recorded career-highs in three-pointers made (5) and points (15), and Marek Blazevic signed off a double-double of 10 points and ten rebounds for Zalgiris, which dropped to 3-15.

Real Madrid showed its class in claiming a 74-89 victory over ALBA Berlin in the German capital on Thursday. Real took control in the first half, holding several double-digit leads after making a 0-8 run early in the second quarter. ALBA cut the margin to 6 points in the third quarter, but Real soon raced away again, sealing the outcome long before the final buzzer. Thomas Heurtel led the winning team with 17 points and seven rebounds, while Vincent Poirier scored 13, Guerschon Yabusele added 12, and Trey Thompkins had 10. ALBA guard Maodo Lo was the game’s leading scorer with 21 points, with Marcus Eriksson and Ben Lammers contributing ten apiece in defeat. Real improves to 16-3 at the top of the standings after four straight wins, while ALBA is now at 6-12 third from bottom.

Maccabi Playtika Tel Aviv finally returned to the winning column as it convincingly beat Olympiacos Piraeus 84-69 to snap an eight-game losing streak. It was Maccabi’s first EuroLeague game of 2022, and the first time the team has played since an Israeli League contest on January 3. Ante Zizic led the way with 23 points for Maccabi, which won for the first time since beating AS Monaco 95-84 in Round 10 on November 17, 2021, and improved to 8-11. Keenan Evans scored 14 points, Scottie Wilbekin added 13, and James Nunnally produced 11 points and four assists. Neither team could pull away until a 15-4 Maccabi run to lead by 11 points in the third quarter. And Maccabi held Olympiacos to just one free throw in the first 5 minutes of the fourth quarter. Olympiacos dropped its second straight game to fall to 12-7 – including a 3-7 record on the road. Georgios Printezis was the top scorer for the guests with 13 points, while Tyler Dorsey scored 12 points against his former team.