Kristaps Porzingis Drafted by The Knicks 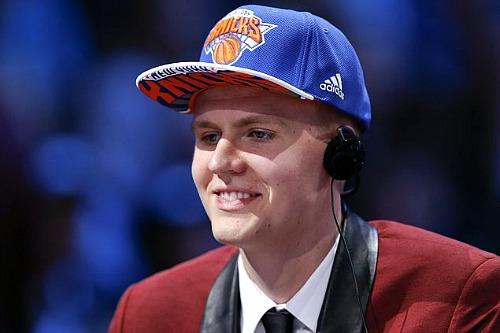 The 2015 NBA Draft is now in the books and there were more than a few surprises. Some pleasant, some not as much. Firstly, despite the cross-team communication that was going on days leading up to the draft, no “blockbuster” deals took place. As expected, the Minnesota Timberwolves went ahead and picked Karl-Anthony Towns first overall. Some people, including Jahlil Okafor himself, were a bit surprised that he was not selected by the Los Angeles Lakers with the second pick in the draft. They instead opted to go with D’Angelo Russell. Okafor was taken with the third pick, which belonged to the Philadelphia 76ers, a team Jahlil did not even work for. The Sixers have both Nerlens Noel and Joel Embiid as their key big men. That said, the Sixers were not about to pass up on the best player available. Embiid’s recovery from the injury that sidelined him from playing in the 2014/15 season has hit a setback, and grabbing Okafor could come out as a prudent move.

The New York Knicks, with the fourth pick in the 2015 NBA Draft, selected Latvian player Kristaps Porzingis. Sadly, he was received with a few “boos” from some of the Knicks fans in attendance at the Barclays Center. In some way, you can’t really blame them. Porzingis is being referred to as a “high risk-reward” pick. Phil Jackson is convinced that the 215 cm, 20-year-old has the biggest chance of breaking out into a star among the players available. The thing is, New York’s fan base is so used to its fast-paced lifestyle, coupled with poor performances in recent years, has left them with little patience for someone who “could” grow into something great. Not since the likes of Pau Gasol and Dirk Nowitzki has an international draft pick emerged to become an all-star. While both players have had stellar careers, the drought of players who will carry the banner of international players’ success in the NBA has been on for quite a long time. For Porzingis, this is still a dream come true, and he vows to work hard and improve. Now whether the Knicks fan base agrees with Phil Jackson’s choice or not, it does not really matter at this point. Porzingis is now his project and quite possibly represents the future of the franchise. Porzingis played for Baloncesto Sevilla from Spain’s Liga Endesa in 2014/15. He averaged 11.6 ppg and 4.1 rpg in 16 games of Eurocup competition, and 10.7 ppg and 4.8 rpg in the Spanish ACB.

Another highlight of the night was the Dallas Mavericks’ selection of Satnam Singh Bhamara, 52nd overall. Singh is the first-ever Indian player to be drafted into the NBA. Singh, like many of the players drafted last night, is excited to begin his pro career in the NBA. It comes as no surprise that he has tried to pattern his game after that of dominating big men, Shaquille O’Neal, Dwight Howard, and Yao Ming.

Kristaps Porzingis Drafted by The Knicks added by Erik on June 26, 2015
View all posts by Erik →