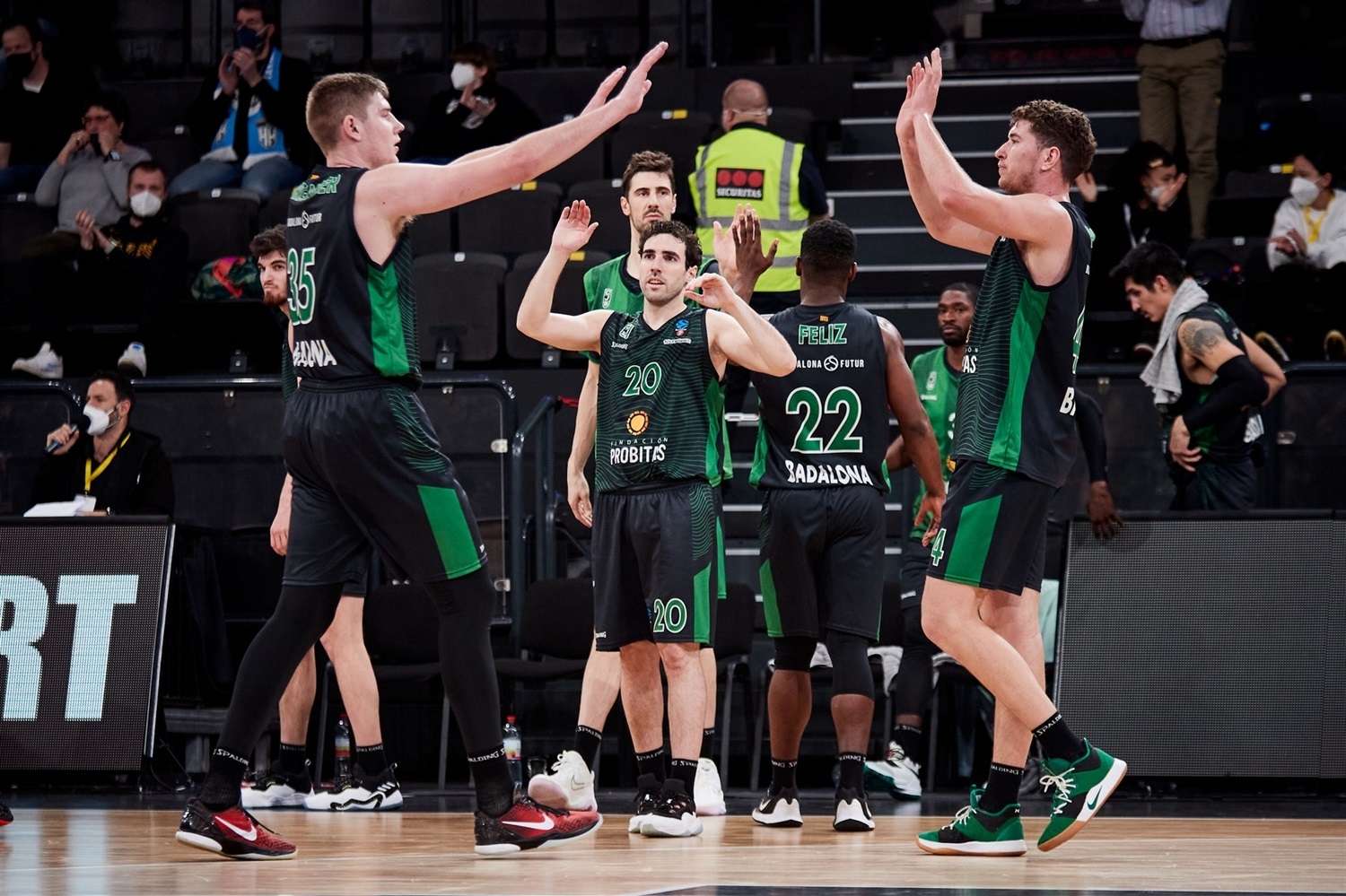 The 11th round of the 7DAYS EuroCup Regular Season saw changes at the top in both groups. Joventut is alone at the top of Group A with a 9-2 record after winning in Hamburg. It had shared the top spot with Partizan, which lost at Turk Telekom. Lokomotiv routed Lietkabelis to tie Partizan for second at 8-3. Metropolitans and Andorra also collected important wins. In Group B, Valencia crushed Buducnost and leapfrogged into the top spot alongside Gran Canaria, which rallied past Promitheas. Also, in Group B, Ulm beat Virtus and Bourg bested Cedevita to tighten up the races all over the standings.

Lokomotiv Kuban Krasnodar booked consecutive wins for the first time since November as it rolled past Lietkabelis Panevezys 90-62 in Group A. Lokomotiv started the season 4-0 but had not won back-to-back games since then. Lokomotiv opened an 11-point lead early in the second quarter before losing most of that advantage. The hosts went on a 19-6 run spanning the halftime to build a 15-point cushion, and Lietkablelis never got closer than 9 points the rest of the way as Lokomotiv improved to 8-3. Errick McCollum and Darius Thompson both scored 15 points to pace five Lokomotiv scorers in double figures. Stanislav Ilnitskiy poured in 14 points, and Andrei Martiuk and Vladislav Emchenko both pitched in 11 points, with Martiuk also grabbing 11 rebounds. Lietkabelis saw its two-game winning streak fall to 5-6 despite Djordje Gagic scoring 15 points and Panagiotis Kalaitzakis tallying 12 points and seven rebounds.

Joventut Badalona kept rolling by overturning an early double-digit lead to claim a 75-92 road win at Hamburg Towers. Hamburg raced into a 16-6 advantage as Joventut struggled to find any offense before the visitors responded to make it 38-37 at the interval. The Spanish side surged clear early in the third quarter, moving into a 46-62 lead which was never overturned despite a Hamburg rally in the fourth. Joel Parra led the winners with a career-high 18 points, while Pep Busquets and Derek Willis both scored 11, and Pau Ribas added 10. Hamburg’s Caleb Homesley led all scorers with 22 points on 4-of-8 three-point shooting. Justus Hollatz scored 14, Maik Kotsar added 12, and Jaylon Brown contributed 10. Joventut is now top of Group A with a 9-2 record after five straight wins, while Hamburg drops to 4-7.

Morabanc Andorra returned to the win column by beating Dolomiti Energia Trento 71-82 at BLM Group Arena on Wednesday night. The visitors had to wait until the end of the second quarter to build a double-digit lead, 31-41, which grew to 40-65 late in the third quarter. Despite Trento getting back within 10-points entering crunch time, back-to-back dunks by Moussa Diagne and Babatunde Olumuyiwa sealed the outcome for Andorra. Drew Crawford set the tone for the winners with 15 points, followed by Clevin Hannah (12) and Nacho Llovet (10). Trento was led by Wesley Saunders, who went for 13 points and six rebounds. Andrea Mezzanote and Cameron Reynolds scored 12 apiece, and Desonta Bradford netted 11 in defeat. Andorra snapped a two-game losing streak to improve to 5-5. Trento suffered its sixth loss in a row to drop to 1-10.

Mincidelice JL Bourg en Bresse made a winning streak for the first time this season after holding off Cedevita Olimpija Ljubljana 76-69 on Wednesday at Ekinox. Bourg outscored the visitors 10-0 over the final 5 minutes of the second quarter to lead 37-25 at halftime and was able to fend off Cedevita’s charges in the third and fourth quarters to build on the Round 10 victory at Umana Reyer Venice and improve to 4-7 on the season. The result took Bourg past Cedevita in the standings, too, as the visitors fell to 3-7. Maxime Courby led all Bourg scorers with 13 points, Axel Julien recorded his first double-double in the competition with 12 points and ten assists, and Hugo Benitez added 10 points. Yogi Ferrell paced Cedevita with 24 points, Edo Muric tallied 13 points and 12 rebounds, and Jaka Blazic also scored 13 in defeat.

Herbalife Gran Canaria reclaimed first place in Group B as it held off a determined Promitheas Patras 81-62 at home. Dylan Ennis led the way with 18 points while Khalifa Diop tallied 11 points and Nicolas Brussino and Chris Kramer both scored 10 points as Gran Canaria won its fourth straight game to improve to 8-2 in Group B. Gran Canaria took control of the game with an 18-4 run to start the second half for a 12-point lead. The margin was as high as 15 before Promitheas rallied within 8 points in the fourth quarter only to see the hosts pull away. Promitheas has now lost five in a row in dropping to 2-8 at the bottom of the group despite Kendrick Ray hitting for 17 points and Dario Hunt scoring 15 points.