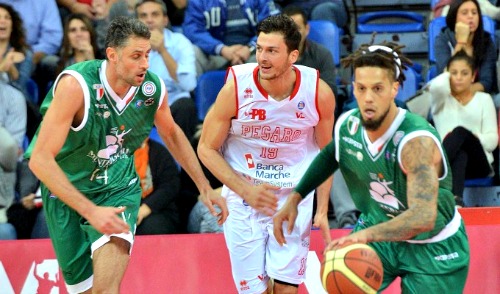 Two games capped off Round 4 of the Italian SerieA regular season. Both EA7 Armani and Montepaschi were able to down their opponents and are now comfortably part of the league’s top six teams with identical 3-1 records. There no undefeated teams left and some wonder which club will be able to set themselves apart from the rest of the pack and pull away with a string of victories.

Armani Milano took care of business at home as they kept Giorgio Tesi winless. They used a strangling defense that stifled the visitors, forcing them to commit 20 turnovers for the match. A strong effort from Armani’s reserves also sparked an overwhelming tide of points that the visiting team could not overcome. Keith Langford (193 cm, Kansas’05) put on a show, leading his team from the bench with a game-high 17 points. He had his way with the defense, making all of his attempts from the two-point range and going for a perfect five for five from the line. Armani led from the get-go and did not look back as they outclassed Pistoia.

Giorgio Tesi had three starters to reach double figures, but their reserves could not bring the goods on the offensive end to put together any runs. Purdue alum JaJuan Johnson (208 cm, Purdue’11) led the team with 13 points and four rebounds. Fellow starters Kyle Gibson (196 cm, Louisiana Tech’11) and Brad Wannamaker (193 cm, Pittsburgh’11) added 12 and 11 points respectively.

Unlike the other game yesterday, in this scenario it was the home team (Pesaro) that took a beating. Montepaschi turned up the heat in the second frame after ending the first quarter down by a couple of points. They managed such an impressive run that they swung a 21-point lead by halftime. Pesaro could not overcome Montepaschi’s smothering defense and were held to just seven points in the third frame. By the time the last quarter was in play there was no momentum to be mustered by the home team and the visitors cruised to their victory.

Montepaschi was led by the stat-sheet filling line of import Daniel Hackett (199 cm, USC’09), who scored 20 points, pulled down five rebounds, dished six assists and grabbed four steals against his former team. He led two other teammates with double-digit scoring for the game. Minutes were distributed quite evenly by coach Marco Crespi and Ghanian-Italian David Cournooh (188 cm) and Kim English (198 cm, Missouri’12) put on a show off Montepaschi’s bench with 16 and 14 points respectively.

The rest of the action from Round 4 took place on November 3.