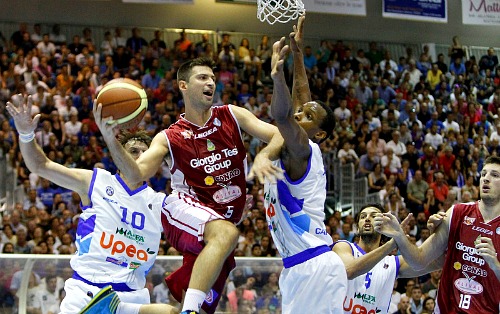 The Italian Serie A ushered in the 2014/15 season with a full slate of games as all 16 teams in the league took to the hardwood. Round 1 saw some familiar teams establishing early momentum with opening night wins, as well as a few surprises here and there. Overall, fans of Italian basketball were treated to some exciting and entertaining action.

It was a disappointing home loss for Capo d’Orlando, considering they were in control of the game early as they managed to compile a 10-point lead at the end of the first quarter. They also were the better shooters from beyond the three-point arc, making eight of their 23 attempts. Pistoia came back in the second period and almost erased the host’s advantage, trailing just by one point (39-38) by the halftime break. In the second half Pistoia’s Linton Johnson continued to assert his presence in the paint. Johnson finished the game with a double-double, scoring 16 points and grabbing 10 rebounds. He also made his impact on the defensive end with two steals and two blocks.

Trento received an eye-opening welcome to the Serie A. They won the LNP Gold Championship, but had to deal with an opening night loss at home to Reggio Emila. American import Tony Mitchell played well for Trento, delivering 26 points for his team on some solid shooting. His effort, however, was offset by Reggio Emila’s Rimantas Kaukenas who came up with 21 points of his own. The differentiating factor was the teamwork and support each lead scorer received for the night. Drake Diener and Kristof Lavrinovic came Kaukenas’ aid with 17 and 13 points respectively. Conversely, only Davide Pascolo was able to help Mitchell carry the scoring burden with his 15 points. Reggio Emila was more active on the glass and moved the ball better than Trento, but it was a lesson learned and Trento should look to claim their first win soon enough.

Sidigas Avellino fell at home to Venezia despite a very close game for three straight quarters. Venezia gained their momentum late in the game with a small runs in the third quarter and controlled the momentum in the final period. Avellino did show good teamwork with four of their players managing to score in double figures, led by Adrian Banks’ 15 points. Timing was crucial in Venezia’s victory as their three-point shots started falling at just the right time. Jeffrey Viggiano led the way for Venezia with 15 points and two steals.

This was the most lopsided game of the night. Enel Brindisi is already on track for a solid season this 2014/15 with this win. Pesaro could not deal with Brindisi’s attacking offense. The hosts got off to an early lead (31-17) at the end of the first quarter and did not look back. A major factor was Pesaro’s poor perimeter defense. Enel Brindisi found too many open shots from the outside and they converted 12-of-22 shots from three-point range. Pesaro also found themselves forcing too many shots and did not move the ball to find the open man. They tallied only three assists for the entire game! For now Pesaro, must look to make adjustments if they do not want to deal with similar blow-outs on a regular basis.

The club from Rome took care of their home court and made use of it to turn away JuveCaserta. To their credit, JuveCaserta made the most of their disadvantaged situation. Only seven players were in the team’s rotation for the night and fatigue could have also played a role in their loss. Scott Carleton and Frank Gaines bore the scoring burden as best they could, producing 18 and 17 points respectively for the contest. For the hosts, Kyle Gibson was the one who got the hot hand from the outside and he finished with a game-high 21 points, thank in part to his going 4-of-10 from beyond the arc.

The Italian Supercup winners were able to parlay their impressive preseason form into some good momentum to start the 2014/15 season. Sassari is well prepared for this season and should remain a force to be reckoned with all throughout. Sassari did not create distance from Bologna in the first half of the game and only had a two-point lead by halftime. Sassari, however, stormed out during the third period and kicked up the tempo to the next level and sent the visiting club reeling from the amount of energy they brought to the table. Sassari’s David Logan five other players in double-digit scoring with 22 points. Jerome Dyson did a knockout job in the backcourt with his 11 points, seven assists and four steals for the game. Allan Ray was Bologna’s top scorer with 19 points off the bench.

The 2013/14 defending champions Emporio Armani Milano got off to a positive start this season with a win on the road. Both teams got off to a slow start as they were feeling each other out in the first quarter. More of the same defensive stances were in play during the second period. It was in the third frame when Milano woke up and outscored their hosts by 10 points to pull away with a 14-point edge heading into the last 12 minutes of regulation. Vanoli Cremona rallied behind the support of their fans at home and almost took down Milan’s once daunting lead. Samardo Samuels was a key factor in the game for Armani. He tallied 22 points and 10 rebounds for the night as his team continually pounded the ball to him in the post. Jazzmarr Ferguson answered for Vanoli Cremona, but his attack came from the outside as he knocked down all three of his shot attempts from deep. He ended the night with 18 points to his name.

Varese rode the strong performance of French import Yakhouba Diawara, who poured in 28 points for the game. The only knock on his game for the night was his poor 3-of-9 shooting from the charity stripe. His teammates made up for his deficiency and the Varese managed to convert 22 of their 34 shots from the foul line. Varese built their lead as early as the first quarter, which they ended with 21-15 lead. More solid runs during the third frame allowed them to increase their advantage. Varese held strong in the final period to stave off Cantu’s last-ditch attack. Darius Johnon-Odom and James Feldleine were responsible for most of Varese’s three-point shooting output for the game, combining for 9-of-16 from three-point range. They ended the night tallying 22 and 19 points respectively.