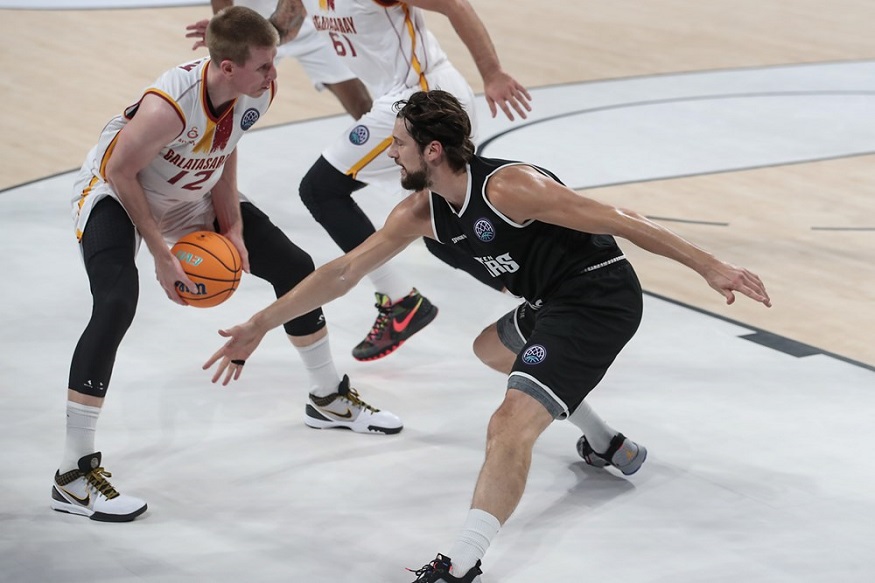 Igokea tasted victory in the Basketball Champions League (BCL) for the first time in club history at the expense of Turk Telekom, while a long Dylan Ennis triple gifted Zaragoza a comeback victory over brave Nizhny Novgorod.

That is far from sufficient, though to describe the action-packed Wednesday that concluded Week 4 action in the 2020-21 Basketball Champions League, so let’s have a closer look at all six games of the night:

Igokea jumped in the driver’s seat after the opening exchanges and never let go, as they celebrated their first-ever success in the BCL in a dreamy fashion, defeating 77-66 a heavyweight such as Turk Telekom.

The hosts trailed the Ankara team for just over a minute. Still, they quickly established their favorite, disciplined pace on the encounter to claim the lead, and Dalibor Ilic converted a three-point play 8:47 from the third buzzer to extend the gap to 15 points, 45-32.

Turk Telekom reacted and reduced the deficit to 53-52 on a Kyle Wiltjer triple 8:23 from the end, but Antabia Waller knocked down a jumper to spark an 11-0 Igokea run.

Nikola Jovanovic capped it off with a layup 4:45 from the final buzzer for Igokea to stretch the lead to 66-54, and the visitors never came within single digits again.

Anthony Clemmons led the way for the hosts with 17 points, 7 assists, and 3 rebounds while Jackie Carmichael had 15 points, 4 assists, and 3 boards. Turk Telekom’s Tyler Ennis finished with a game-high 19 points in defeat.

Dylan Ennis drilled a triple from eight meters out with 0.9 seconds left on the clock for Casademont Zaragoza to edge out short-handed Nizhny Novgorod 78-75 at home, the Spanish team’s first win in the tenure of new head coach Sergio Hernández.

Nizhny traveled to Spain with just eight players due to the pandemic, and Zaragoza appeared to be seizing the initiative early on and led briefly by five points.

Timofei Gerasimov, however, sunk a jumper, just before the eight-minute mark in the second frame, to ignite a 22-4 Nizhny run that Alex Gavrilovic capped off with a hook shot 3:15 from the halftime buzzer to make it 40-27 for the Russian team.

Zaragoza began chipping away at the gap in earnest after the gap, and Robin Benzing hit a triple to bring Zaragoza back ahead, 50-48 with 1:58 left to play in the third period.

But Nizhny was not going to roll over and reclaimed the lead, 69-60 on an Ivan Strebkov jumper 5:48 from the end, shortly after Zaragoza’s Nico Brussino exited the game with a leg injury.

But Zaragoza threw everything at the visitors, and D. J. Seeley sunk a long two to tie the scores at 75-75, with 49 seconds left to play.

Nizhny misfired on the other end, and Ennis came up with an offensive rebound off a Seeley miss. He calmly dribbled back outside the arc and knocked down the game-winner as the clock was winding down.

Ennis had 13 of his team-high 22 points in the final quarter and added 4 boards, while Benzing finished with 16 points and 5 boards. Alex Gavrilovic had a near double-double of 19 points and 9 rebounds in a losing effort.

Galatasaray trailed Bakken Bears for most of the first half but showed a much improved defensive effort after the interval to claim their first-ever win in the BCL, 91-81 at home.

The Turkish team, who played their first game since parting ways with coach Ertugrul Erdogan and with his former assistant Omer Ugurata at the helm, appeared surprised early on to find that the Danish champions didn’t travel all the way to Istanbul to see the sights.

Bakken dished 10 assists in the opening quarter and reached a double-digit lead, 25-15, on a De’Shawn Stephens off a beautiful Ryan Evans bounce pass right before the first buzzer.

But Yigit Arslan, who came off the bench, poured in 8 points on three jumpers in quick succession for Galatasaray to tie the scores at 27-27, and the Turkish team even managed to claim the lead right at the halftime buzzer, 47-45 on a Brock Motum circus shot.

The hosts never let go of the driver’s seat again, stretching the lead to as many as 16 points in the fourth stanza, as they even ended up dishing more assists than their visitors, 24 to 21.

RJ Hunter led the way for the winners with 19 points off the bench, and Motum finished with 17 points and 7 rebounds, while Bakken’s Q. J. Peterson had a game-high 22 points in a losing effort.

AEK overcame a slow start, which saw them trail Tsmoki Minsk by as many as nine points, and dominated the second half to pick up a 95-69 win at home, their second in as many games in Group C.

With Minsk leading 35-26 and 5:34 remaining to the end of the first half, Matt Lojeski knocked down a triple to spark a 21-4 AEK burst, and the hosts went into the interval holding an 8-point lead, 47-39.

With the hosts leading by six points just before the eight-minute mark in the third, Keith Langford drilled a three and instigated a new AEK burst for the Greek side to stretch the gap to 14 points, 63-49, on a Jonas Maciulis dunk.

AEK’s lead never fell back to single digits as they scored 22 points off turnovers and shot an excellent 13 for 21 from downtown, while Minsk attempted 9 shots from beyond the arc, converting 3 of them.

Hapoel Jerusalem snapped out of a nearly disastrous opening quarter. It held Limoges to just 9 points in the final quarter to celebrate an 81-75 comeback victory, their first win in Group D.

Limoges traveled to Israel without Ludovic Beyhurst but rode the hot hand of Phil Scrubb early on to race to a 15-point lead, 26-11 shortly before the first buzzer.

But TaShawn Thomas, who poured in 16 points on 8 of 9 shooting from the field in the first half, instigated Hapoel’s reaction and the hosts reduced the deficit to just two points, 49-47, in the third frame.

Blatt drilled a triple 7:40 from the final buzzer to cap off a 10-0 Hapoel run and give Jerusalem their first lead since the opening minute, 68-66.

Limoges suddenly seemed like they didn’t have enough fuel left in the tank for a fight, and Hapoel even opened up a 10-point gap and held on to the lead until the end without any late drama.

Thomas finished with 24 points and 4 rebounds, Tarik Philip added 14 points while Blatt dished 11 assists to go with his 6 points, establishing himself as the all-time assists leader in the BCL.

Scrubb had a game-high 26 points and four rebounds in a losing effort for Limoges, who have now dropped to 1-1 in the standings.

Happy Casa Brindisi led Darüssafaka Tekfen almost from start to finish and by as many as 13 points but still needed to hold off the Turkish team down the stretch to emerge victorious 92-81 from their Group H premiere.

Meanwhile, Darüssafaka, who had won in their BCL debut against Filou  Oostende two weeks earlier, has now dropped to 1-1 in the group standings.

The Turkish team claimed an early 5-0 lead that proved short-lived, as Brindisi poured in 30 points in the opening quarter and built their first double-digit lead, 30-20.

The Italian team led by a safe distance for most of the two middle quarters, but the visitors began climbing back late in the third frame, and William Buford sunk two free-throws to reduce the deficit to just two points, 74-72, with 6:34 left on the clock.

However, James Bell hit a triple 4:56 from the final buzzer, and Riccardo Visconti, who got fouled on back-to-back possessions, sunk no less than five free-throws in quick succession to stretch Brindisi’s lead back to10 points, 84-74 with 3:42 remaining.

Visconti led four Brindisi players in double digits with his 20 points and added 5 rebounds, while Darius Thompson chipped in with 18 points and 5 assists. Andrew Andrews had a game-high 26 points for Darüssafaka in a losing effort.