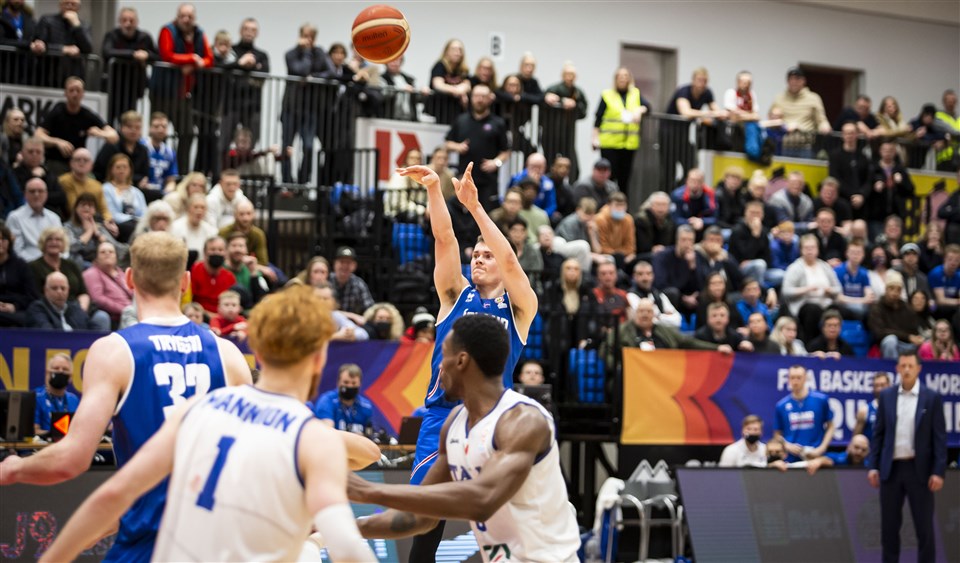 In 2019, Montenegro became the smallest nation to participate in the FIBA Basketball World Cup. And while it’s still early days in the FIBA World Cup 2023 European Qualifiers, Iceland may be looking to threaten the record after climbing to a 2-1 record in Group H.

And they couldn’t have done it more dramatically.

Craig Pedersen’s men went back-and-forth with Italy, getting a double-digit lead inside the final five minutes of the fourth quarter, only to see it squandered as Stefano Tonut played the role of a hero for Italy and forced overtime with back-to-back two-pointers and a massive steal on Iceland’s final possession of the quarter.

The fact that Italy dug themselves out of a hole to send the game to overtime seemed to be in their favor. They were the ones happy to play another five minutes of the contest.

But it wasn’t to be. It was Iceland responding again, playing in rhythm with the constant “Ísland! Ísland!” from the packed stands in Hafnarfjordur, opening up another three-point lead with less than 30 seconds left in overtime.

However, a few paragraphs ago, you learned there was drama. A nice set by Meo Sacchetti created a wide-open three-pointer for Tonut, and the shooting guard sent the game to overtime once again with his only triple of the night.

Again, the pendulum should’ve been on Italy’s side to start the second overtime. And again, it wasn’t. Iceland was a step in front of their guests, thanks to Tryggvi Hlinason’s four straight points and a big offensive rebound at 106-102 heading into the final minute.

Italy tried to fight back once more. Nico Mannion made the first and intentionally missed the second free throw but also stepped over the free-throw line too soon, handing the ball over to Iceland.

Time expired, with the scoreboard reading 107-105, cameras focused on Hlinason, who yelled out loud and exhaled with relief.

His performance went straight into the record books. With 34 points, 21 rebounds, and five blocks, his efficiency column showed an unreal number: 50.

Hlinason now owns the European Qualifiers record by some distance. The previous mark of 37 was set by Edin Atic of Bosnia and Herzegovina, Giorgi Shermadini of Georgia, and Janis Strelnieks of Latvia, all of them coming in 2019.

Guna Ra of Korea is the only player with higher efficiency in FIBA Basketball World Cup Qualifiers history, getting 59 against Syria and 58 against Hong Kong, both times back in 2018.

What was the 2.15m (7ft 1in) man’s secret for this beast mode outing? You’ve guessed it—home cooking.

“I was with my family. Ate the food of my mom. I was just prepared. Playing for Iceland is always an honor, and I love it.”

“I think they knew what we were about, but we still surprised them a little bit with how small we started,” Elvar Fridriksson explained. He himself had a monster game, 25 points, seven assists, and four rebounds in 44 minutes of action.

“It was just a 50-50 game, in the end. Of course, you were worried. With such a great team as them, it’s always very tough when it comes down the stretch. When it’s a one-point game, it can go both ways. I think we did a great job to hold them off and finish it,” Elvar added.

Even coach Sacchetti admitted that Iceland tricked them.

“We know that Iceland’s smaller team is difficult for us because they are quicker, they are good this way, but we suffered under the basket too much,” the Italian play-caller offered.

“Tactically, we knew they had a lot of guards who can score. We decided to take a risk with a defense where I’m lower. We’re trying to deny the easiest buckets and make them shoot. They made a lot of them and a lot of open shots we were giving. Thankfully, we ended like that.”

All of a sudden, Iceland is up at 2-1. It’s time to get back to the record books once more because Montenegro’s population of 600,000 made them the smallest nation to ever participate in a FIBA Basketball World Cup.

And even that number looks enormous from the Icelandic point of view. Their 2021 population estimate says 371,580. That’s just about the size of Bologna, Italy, where they will play the next game on Sunday.

Three games in, still too early to give out bold predictions about Iceland reaching the summit, but this win changes the team’s mentality.

Italy got 23 from Mannion, 22 from Michele Vitali, and 18 from Tonut, but find themselves in a must-win situation ahead of the game on Sunday. Otherwise, they will drop to 1-3, climbing a mountain to reach the FIBA Basketball World Cup 2023.