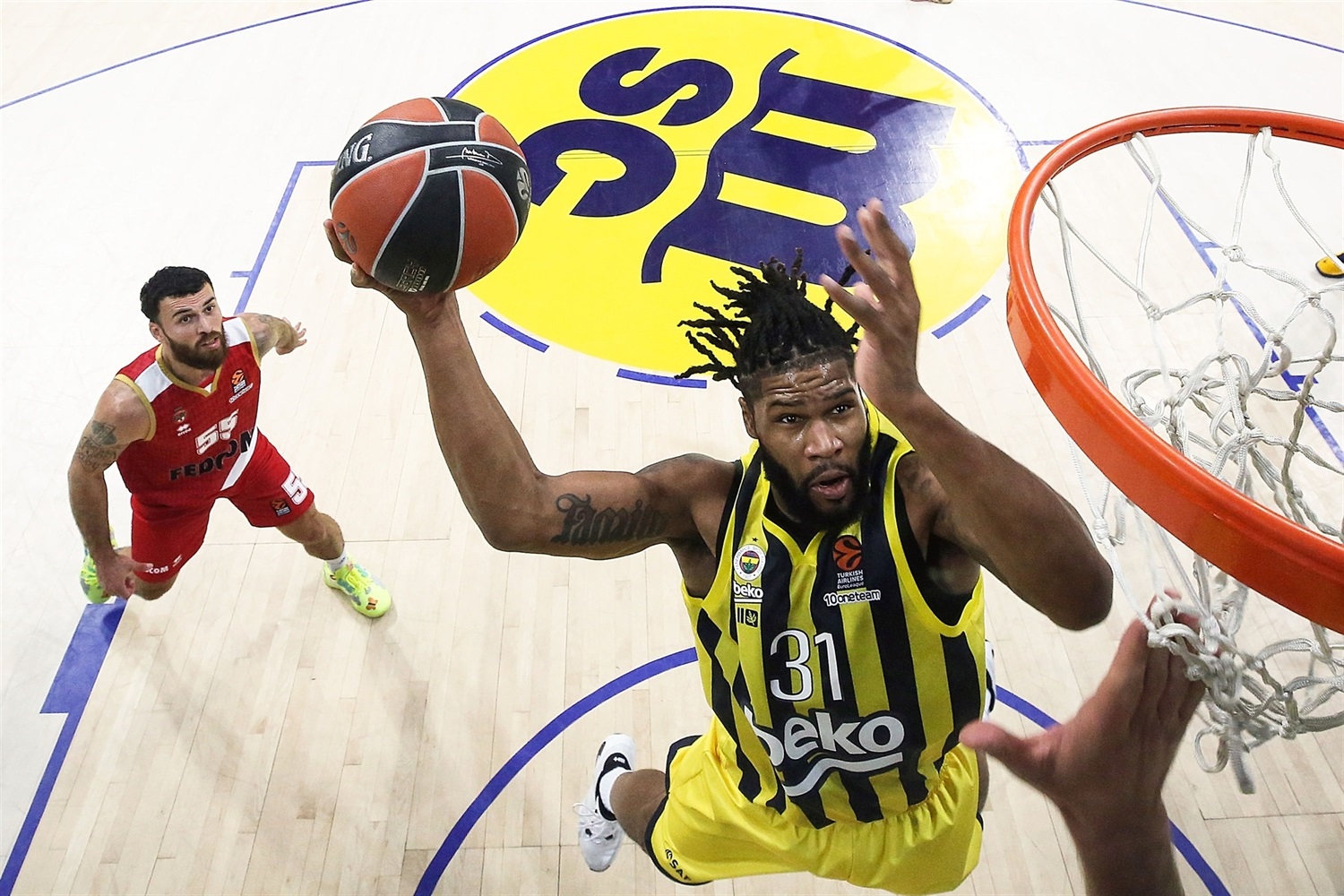 Round 13 of the Turkish Airlines EuroLeague Regular Season started great for home teams as the hosts won all five games on Thursday. Fenerbahce snapped a four-game losing streak by beating Monaco behind a strong game from Jan Vesely, while teammate Nando De Colo became the EuroLeague’s’ all-time leader in performance index rating. Real Madrid edged Maccabi on a layup by Guerschon Yabusele. CSKA blasted Panathinaikos, Zalgiris won its third straight at home at the expense of Baskonia and Bayern held of ASVEL. Among four Friday contests is a rematch of the 2021 championship game between Efes and Barcelona.

In a battle of Turkish Airlines EuroLeague giants, CSKA Moscow grabbed its third consecutive victory by downing Panathinaikos OPAP Athens 97-77 in the Russian capital on Thursday. CSKA lifted its record to 8-5 while Panathinaikos dropped to 3-10 and has yet to win a road game in six tries this season. Alexey Shved led the winners with 17 points and 13 assists. Semen Antonov and Will Clyburn each added 16 points, and Iffe Lundberg had 11 while Nikola Milutinov pulled down 13 rebounds for CSKA. Okaro White led Panathinaikos with 19 points. Jeremy Evans added 15, Georgios Papagiannis and Nemanja Nedovic 14 each, and Howard Sant-Roos 10 for the Greens. Shved and Antonov combined for five three-pointers among eight scorers who staked CSKA a 31-22 lead after 10 minutes. Joel Bolomboy took over with back-to-back dunks in the second quarter, and Clyburn boosted his team’s lead to 47-30. Nemanja Nedovic and Okaro White brought Panathinaikos within 53-38 at halftime. Nothing changed after that break as CSKA raised the margin to 74-53 at the end of the third quarter and sealed the outcome long before the final buzzer.

Fenerbahce Beko Istanbul scored 33 points in the fourth quarter to pull away from AS Monaco for a 96-86 victory at Ulker Sports and Event Hall on Thursday night. The win snapped a four-game losing streak and raised Fenerbahce’s’ record to 4-9 on the season while sending Monaco to its fourth loss in a row and a 5-8 record. Jan Vesely led six Fenerbahce scorers in double figures with 20 points, ten rebounds, and five assists for a season-high PIR of 32. Marko Guduric scored all of his 18 points in the second half, Nando De Colo scored 15, Pierria Henry had 13 points, six rebounds, six assists, five steals, and Achille Polonara and Devin Booker added 11 points apiece. Mike James paced Monaco with a season-high 31 points, Yakuba Ouattara added 15, and Alpha Diallo 10.

Zalgiris Kaunas continued its strong recent run by battling past Bitci Baskonia Vitoria-Gasteiz 72-68 at home for its third win in the last four games. Lukas Lekavicius stepped up with 8 points in the final 3 minutes to give Zalgiris a 3-10 record – with all three wins coming at Zalgirio Arena. Lekavicius finished with 13 points, while Josh Nebo and Mantas Kalnietis both scored 10 points in the win. Baskonia lost for the seventh time in its last eight games as its record fell to 4-9. Steven Enoch paced Baskonia with 13 points and ten rebounds, Simone Fontecchio scored 12 points, Jayson Granger picked up 11 points and six assists, and Lamar Peters chipped in 10 points in the defeat.

FC Bayern Munich stayed strong on its home floor by overcoming LDLC ASVEL Villeurbanne 73-65 on Thursday. ASVEL led from the start and had a double-digit lead early in the second quarter, but Bayern hit back to take its first lead towards the end of the opening period. The home side stayed ahead throughout the third quarter, and although ASVEL briefly made it a one-possession game in the final period, the lead never changed hands again. Augustine Rubit led the way with 19 points and 12 rebounds, while Vladimir Lucic also made a big contribution with 18 points and eight rebounds, including a personal 10-0 run to turn the game in the second quarter. Elie Okobo paced ASVEL with 14 points, while James Gist and Chris Jones scored ten apiece. Bayern improves to 6-7, just behind ASVEL at 7-6.

Real Madrid grabbed its sixth consecutive win by edging Maccabi Playtika Tel Aviv 72-70 in the Spanish capital on Thursday. Real improved to 11-2 in the standings while Maccabi dropped to 7-6. Thomas Heurtel led the winners with 15 points, Guerschon Yabusele added 13, including the game-winning basket, and Vincent Poirier had 11 for Real. Scottie Wilbekin led Maccabi with 14 points, and Ante Zizic and Keenan Evans each scored 10 for the guests.