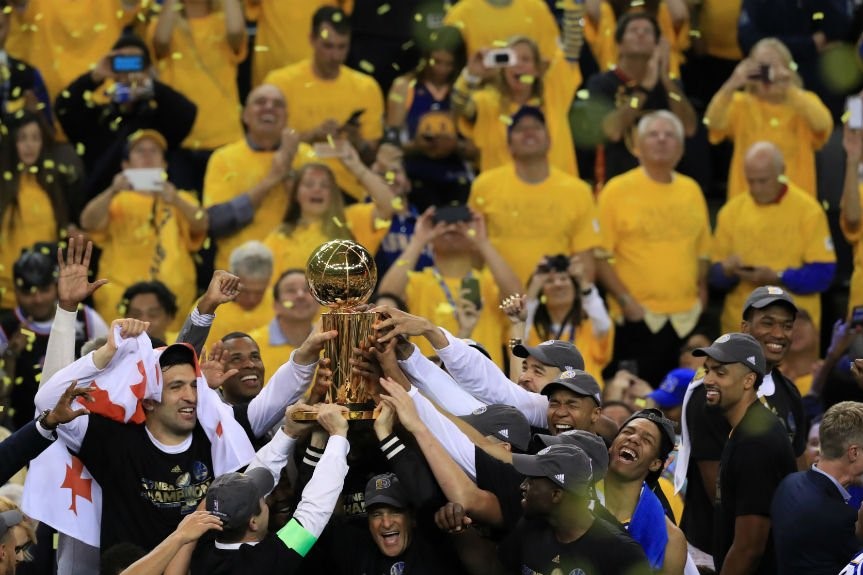 After losing in historical fashion a year ago, Golden State completed their resurgence back to an NBA Championship. The Larry O’Brien trophy returns to the Bay Area for the second time in three years. They won game five of the series versus the Cleveland Cavaliers, 129-120.

The championship run for Golden State will go down as one of the most dominant in the history of the league. They conclude their postseason going 16-1, only losing game four in the Finals. Going unbeaten in the playoffs would have been a first in the history of the NBA, but Golden State only had their focus on winning the title. Because of the game four loss, they did get an opportunity to do something that they failed to do twice last year. Win the championship in front of their raucous home crowd. Seeing the exuberant crowd only made the moment that much more memorable for the Warriors. In last year’s finals, they had an opportunity to win game five and seven at home. Instead, they lost each time which was a huge part of Cleveland’s 3-1 comeback to win their first title.

Game five was not an easy win for Golden State. They were actually trailing for much of the first quarter and into the second. With 10:14 to go in the second, Lebron James made a two-point shot to give Cleveland a 41-33 lead. The Warriors then called a timeout and Coach Steve Kerr pushed the right button to get Golden State rolling. In the next seven and a half minutes, Golden State rolled off a monstrous 30-7 run to take a 15-point lead. These quick tidal waves of points that Golden State hits teams with is their recipe for success and led to winning another NBA title. Cleveland then was forced to play from behind for the entire second half but still hung around to give themselves a chance. The Cavaliers were able to come up with a hard-fought third quarter to cut the deficit to five going into the final quarter.

Cleveland needed to keep working hard in order to come off with the improbable win on the road. However, their shooting went cold and they couldn’t stop Kevin Durant from taking over another NBA Finals game. Cleveland missed way too many lay ups down the stretch and Golden State fed off their home crowd going crazy after each rebound. The dagger was set into Cleveland after Klay Thompson hit a 19-foot jumper to give Golden State a 124-110 lead with 3:14 remaining in the game. Lebron and the Cavs made a valiant effort, but they don’t have the same firepower that Golden State posses.

Of course, the biggest difference between this Finals and last year’s is the addition of Kevin Durant to the Warriors, already, electric lineup. When things got tough last season, Golden State did not have a guy on the team who could score over any player on the Cavaliers. Kevin Durant filled those shoes in the series on his way to an NBA Finals MVP. The explosive scorer finished off his Finals with a 39-point performance in game five on 14-of-20 shooting. He also contributed with seven rebound and five assists. This is his first NBA championship and the emotions were high when the final horn sounded. His mom was on the court to celebrate with him which will go down as one of the best moments in his career.

Durant was not the only Golden State player to have a great series. As a team, everybody played a huge role. Especially, Steph Curry who was relied upon heavily for the Warriors during their rise to becoming a dominant force. The two-time MVP had not performed up to his ability in each of the last two finals prior to this series. However, he changed the story this year and averaged 26.8 ppg and 9.4 apg for the finals. If he can continue putting up these numbers on the big stage, as well as Durant doing what he does, a dynasty is on the horizon.

It’s back to the drawing board for the Cavaliers. They can’t expect much more from their leader, Lebron James. He set an NBA Finals record as the only player to average a triple-double throughout the series. James also passed Magic Johnson for most Finals triple-double in a career, earlier in the series. James continued his greatness with a 41-point outing in gave five as well as 13 rebounds and eight assists. The team as a whole failed to show up in the first three games which led to the 3-0 deficit. J.R. Smith scored just three points in the first two games and did not show up big in a game until game four. Smith did finally come up with a strong game in the finals in game five. The shooting guard went 7-of-8 from three including a long three to go into halftime. Smith finished the game with 25 points which was, by far, his high in the finals.  He and the rest of the team could not hang with the Warriors, especially with James and Kyrie Irving on the bench. The depth of the Cavaliers failed them and new players could be in the fold for next season. Cleveland will still build around Kyrie Irving and Lebron James, but no other player should feel like their spot is set in stone for the 2017/2018 Finals.

That even means Kevin Love, who failed to play well in game five. The big man scored just six points on 2-of-8 shooting in game five. Love did have ten rebounds though, but Cleveland needs more than Love in order to ever overcome the Warriors. The team should either keep Love and find better role players. Or trade Love and fill out the rest of the roster, or even build a package around him to find an upgrade in the post. He is still a major commodity and very intriguing to many teams around the league.

The greatness of the Warriors is a sign to where the NBA is heading. They are an elite three-point shooting team that moves the ball better than any team in the league. The three-point shot will be the focal point for every team going forward and the league will need to adapt. Golden State is changing the game which must put them as one of the best teams in the history of the league. With a couple more titles, an all-time dynasty is in the making.