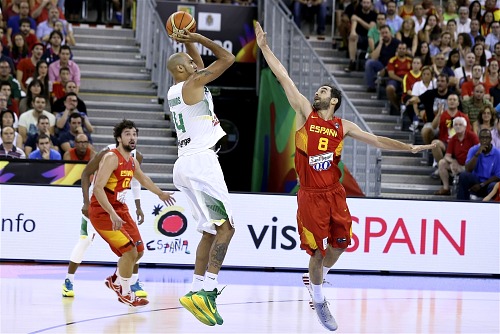 Only Groups A and B hit the hardwood in Day 3 of the FIBA World Cup 2014, but the six games on tap were well worth the price of admission. Exciting action and intriguing upsets thrilled the crowds in attendance and the millions watching at home. Spain has established a firm foothold of Group A’s top position, while Greece is number one in Group B. Both teams are still perfect with 3-0 records.

Here is a round up of the amazing basketball that was played for the day.

Spain kept their perfect record intact with a convincing 82-63 win over Brazil. They started off hot and were able to put up 30 points on the score board in the first quarter alone, leaving the Brazilian contingent struggling to find answers while staring at a 14-30 deficit after only 12 minutes. Brazil fought back in the second period, but the Spanish squad renewed their onslaught after the halftime break. When the final period came around, Spain had secured enough of a comfortable lead and just kept their opponents in check. Brazil’s defense was unable to keep Pau Gasol in check as the Spanish big man went off for 26 points, nine rebounds, and three blocks. He also punished them from the outside as he knocked down three triples. Leandro Barbosa led Brazil with 11 points.

Serbia outgunned Iran to win 83-70 and get them back on track. They are now 2-1 and remain in contention to move on to the next round. Iran now has three losses in as many games and is at the bottom of the group’s standings. Serbia displayed good teamwork and displayed confidence and composure throughout the game. They overcame monster games from two of Iran’s top players, Hammed Haddadi and Mohammad Samad Nikkah Bahrami. Haddadi scored 29 points, while Bahrami added 20 points and seven assists. Unfortunately, they were the only Iranian players who managed to make an impact on the game. On Serbia’s side, Nemanja Bjelica came up with a solid double-double performance with 18 points and 10 rebounds as he made his presence felt in the paint in both ends of the court.

France dominated Egypt 94-55 and are now 2-1 and sit in second place in Group A. Egypt is in danger with their 0-3 slate. It was an easy win for the French team as they steadily built on eight-point first quarter lead as every succeeding period ticked by. Their offense was impeccable as the team shot an impressive 70.4% from the field. They also out hustled the Egyptians when it came to attacking the glass, with 17 rebound advantage, 37-20. France was comfortable enough with how they controlled the game that their reserves spent more time on the floor than their starters. Joffrey Lauvergne was France’s top performer with 12 points and seven rebounds in just 11 minutes of action.

Senegal is proving to be a dark horse in Group B. They defeated Puerto Rico in Day 2 and now were able to edge out Croatia in an amazing 77-75 upset. Senegal ended the first half with a nine point lead, 41-32. Croatia tried to make a comeback after the break, but their shots from the outside were not finding their mark. Eventually, Croatia was able to chip away at Senegal’s lead and trailed them 75-72 with 19 seconds left in regulation. Senegal did not buckle under the pressure and managed to seal the game by a slim two point margin. But as they say, “a win is a win,” and Senegal can head into their next game with elevated morale. Senegal’s athletic big man, Gorgui Dieng, was a beast with 27 points eight rebounds, and two blocked shots.

Greece (3-0) remains undefeated in the competition with their 90-79 win over Puerto Rico (0-3). The Greek team was able to push the tempo in the second and third periods to pull away from their opponents. They played well in transition and maximized their possessions for most of the game. Puerto Rico’s Renaldo Balkman and Jose Juan Barea put up a valiant effort for their team with 23 and 21 points respectively. Their fourth quarter rally was a case of being too little, too late. Greece was led by Nikolaos Zisis who finished the game with 19 points.

Argentina was initially stunned by the Philippines’ run-and-gun style of play, but was able to regain their composure and took control of the tightly contested game thanks to their impressive shooting from the outside. The shootfest of a game ended with Argentina prevailing of their Philippine opponents, 85-81. The Philippines shot 13-of-27 from downtown, while the Argentinian sharpshooters responded with 15-of-38 shooting from beyond the arc. Luis Scola led Argentina’s stand with 19 points and seven rebounds, while the Philippines’ top scorer was Ranidel de Ocampo with 18 points.