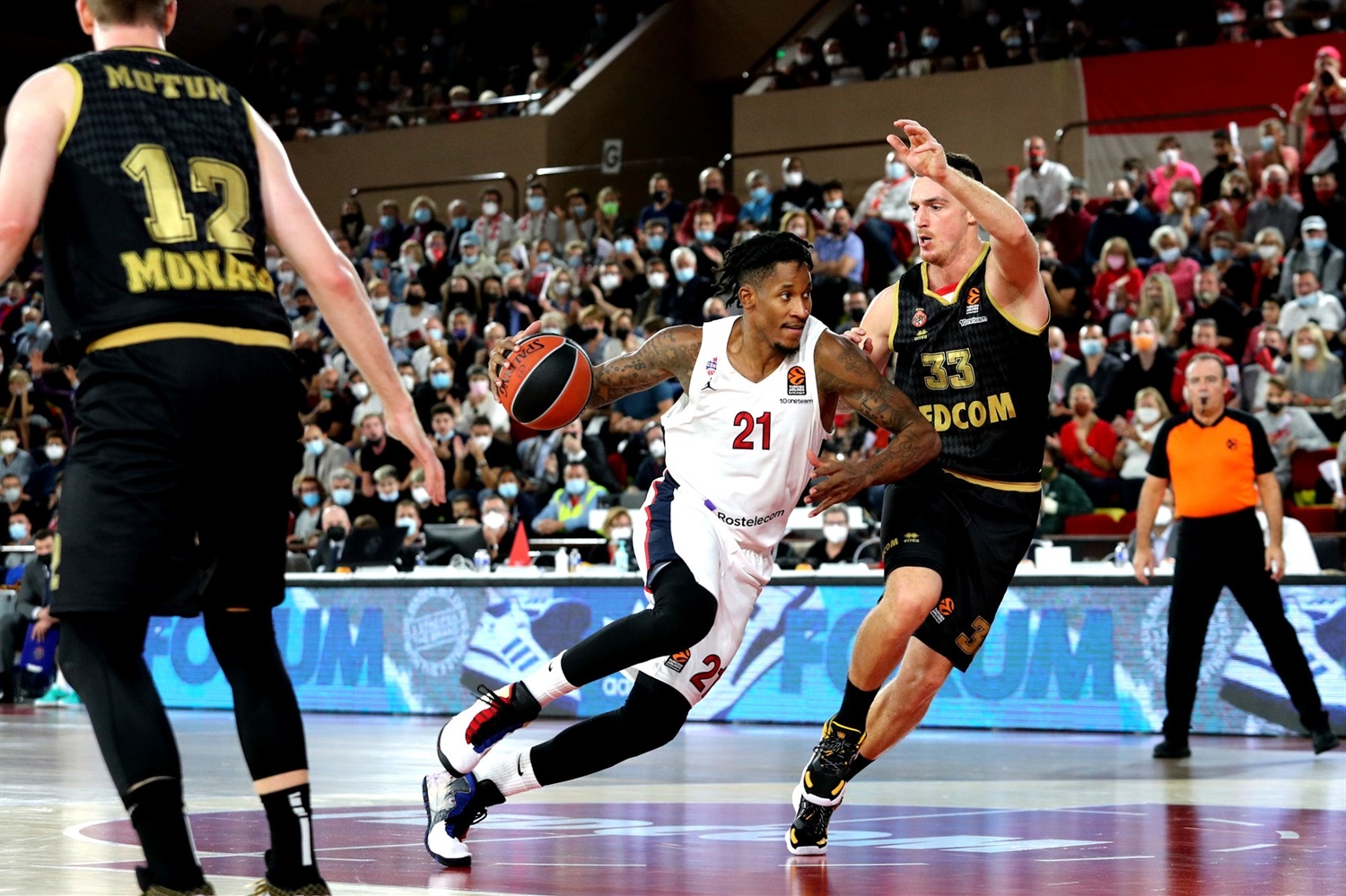 The last half of October’s second double-round week served to suddenly narrow the gap between the haves and the have-nots in the Turkish Airlines EuroLeague standings. Barcelona’s first loss, to Maccabi (5-2) in Tel Aviv, leaves it tied with Milan, a home winner, vs. Zvezda (2-5), for first place, both at 6-1. Maccabi is joined at 5-2 by Olympiacos and ASVEL, which beat Fenerbahce (2-5) and Panathinaikos (2-5), respectively, along with Real, a road loser at UNICS (3-4). Zenit St Petersburg walloped Baskonia (3-4), and Monaco rallied to down CSKA and join the two Russian teams with 4-3 records. Bayern (3-4) was the road winner of the German derby and sits 10th in the standings. The only Round 7 winner below that was defending champion Efes (2-5), which stopped still-winless Zalgiris (0-7) at home. Only two victories separate ninth and first places, and the same number that divides ninth from 17th. The old familiar EuroLeague parity is coming into view at the end of one month’s play.

UNICS Kazan sent a message that echoed around the Turkish Airlines EuroLeague by downing Real Madrid 65-58 at home on Friday. UNICS improved to 3-4, completing a sweep of Spanish visitors in the double-round week, while Real dropped to 5-2. Mario Hezonja and Andrey Vorontsevich led the winners with 13 points apiece. Tonye Jekiri pulled down ten rebounds for UNICS. Walter Tavares led Real with 15 points. Guerschon Yabusele added 13, while Alberto Abalde had 10 for the guests. Hezonja stepped up early to give UNICS a 10-3 lead. Tavares and Yabusele took over for Real, but Marco Spissu kept the hosts ahead, 14-11, after 10 minutes. Vorontsevich gave UNICS a double-digit lead, 21-11, but Juan Nuñez, Adam Hanga, and Sergio Llull pushed Real to get as close as 35-34 at halftime. Tavares took over after the break, leading the guests to take a 49-51 lead at the end of the third quarter. Abalde gave Real its last lead, 55-58, but Vorontsevich, Lorenzo Brown, and John Brown fueled a 10-0 closing run that gave the UNICS fans a victory to remember.

Zenit St Petersburg launched two huge runs to demolish Bitci Baskonia Vitoria-Gasteiz 83-54 and split the tie between the teams in the middle of the standings. Baskonia led from the start and got into a 9-point lead, but a 24-0 run in just over 6 minutes before halftime changed the game in Zenit’s favor for a 45-30 interval lead. Another big run, 16-0, saw Zenit take the lead well past 20 points in the third quarter, and the game was over. Jordan Loyd led the scoring with 20 points and added eight rebounds, and Alex Poythress gave a superb all-round performance with 8 points, nine rebounds, four assists, and four blocked shots. Jordan Mickey added 10 points and seven rebounds, while Dmitry Kulagin scored 12 and Billy Baron added 10. Jayson Granger led Baskonia’s resistance with 13 points, while Simone Fontecchio and Wade Baldwin both scored 12. Zenit improves to 4-3, while Baskonia drops to 3-4.

Reigning Turkish Airlines EuroLeague champ Anadolu Efes Istanbul delivered its best performance of the season and rolled to a 94-60 win over visiting Zalgiris Kaunas on Friday night. Efes improved to 2-5, while Zalgiris remains the only winless team after Round 7. Efes took control early behind Filip Petrusev, Tibor Pleiss, and Krunoslav Simon, held a double-digit lead for the majority of the first half, then blew the game wide open behind the reigning EuroLeague MVP Vasilije Micic and cruised to a 34-point victory. Pleiss paced Efes with 17 points plus seven rebounds. Petrusev collected 14 points and six rebounds. Simon had an all-round 11 points, five rebounds, and four assists, Micic also scored 11, and Elijah Bryant collected 10 points, seven rebounds, and four assists in the victory. Lukas Lekavicius and Arturas Milaknis each netted 14 for Zalgiris.

AS Monaco came up with a victory for the ages, erasing a 22-point deficit to eventually roll past CSKA Moscow 97-80 at home. Monaco trailed 13-35 in the second quarter but then took control of the game with a 24-5 run in the third quarter and started the final frame with a 16-7 surge to win its second straight game at home and move to 4-3. It was a real team effort for Monaco, who had seven players score in double figures, topped by Donta Hall’s 17 points while Danilo Andjusic had 16 points, Brock Motum scored 12, Dwayne Bacon and Paris Lee both picked up 11, and Mike James and Alpha Diallo chipped in 10 points. This was not the result CSKA was looking for after coming back from an 18-point deficit to lead against LDLC ASVEL Villeurbanne earlier in the week only to lose in the end. The Russian powerhouse dropped to 4-3 despite Will Clyburn scoring 19 points, with Alexey Shved tallying 15 points and five assists and Joel Bolomboy contributing 13 points.

LDLC ASVEL Villeurbanne confirmed its outstanding form by downing Panathinaikos OPAP Athens 70-84 in the Greek capital on Friday. ASVEL improved to 5-2 while Panathinaikos dropped to 2-5. Elie Okobo paced the winners with 35 points. Chris Jones added 13 while Kostas Antetokounmpo had 12 for ASVEL. Daryl Macon and Ioannis Papapetrou led Panathinaikos with 16 points apiece, and Jeremy Evans added 12 for the hosts. Okobo stepped up for ASVEL early in the game and got plenty of help from an outstanding Antetokounmpo – 6 points, three rebounds, and three blocks in under 4 minutes – to give ASVEL an 18-24 lead after 10 minutes. Macon and Evans gave Panathinaikos a 34-27 margin, but David Lighty, Jones, and Okobo allowed ASVEL to regain a 38-43 margin at halftime. Nemanja Nedovic stepped up after the break, but Okobo kept ASVEL in charge, 55-58, at the end of the third quarter. Okobo took over in the fourth quarter, hitting back-to-back three-pointers in crunch time to seal the outcome down the stretch.