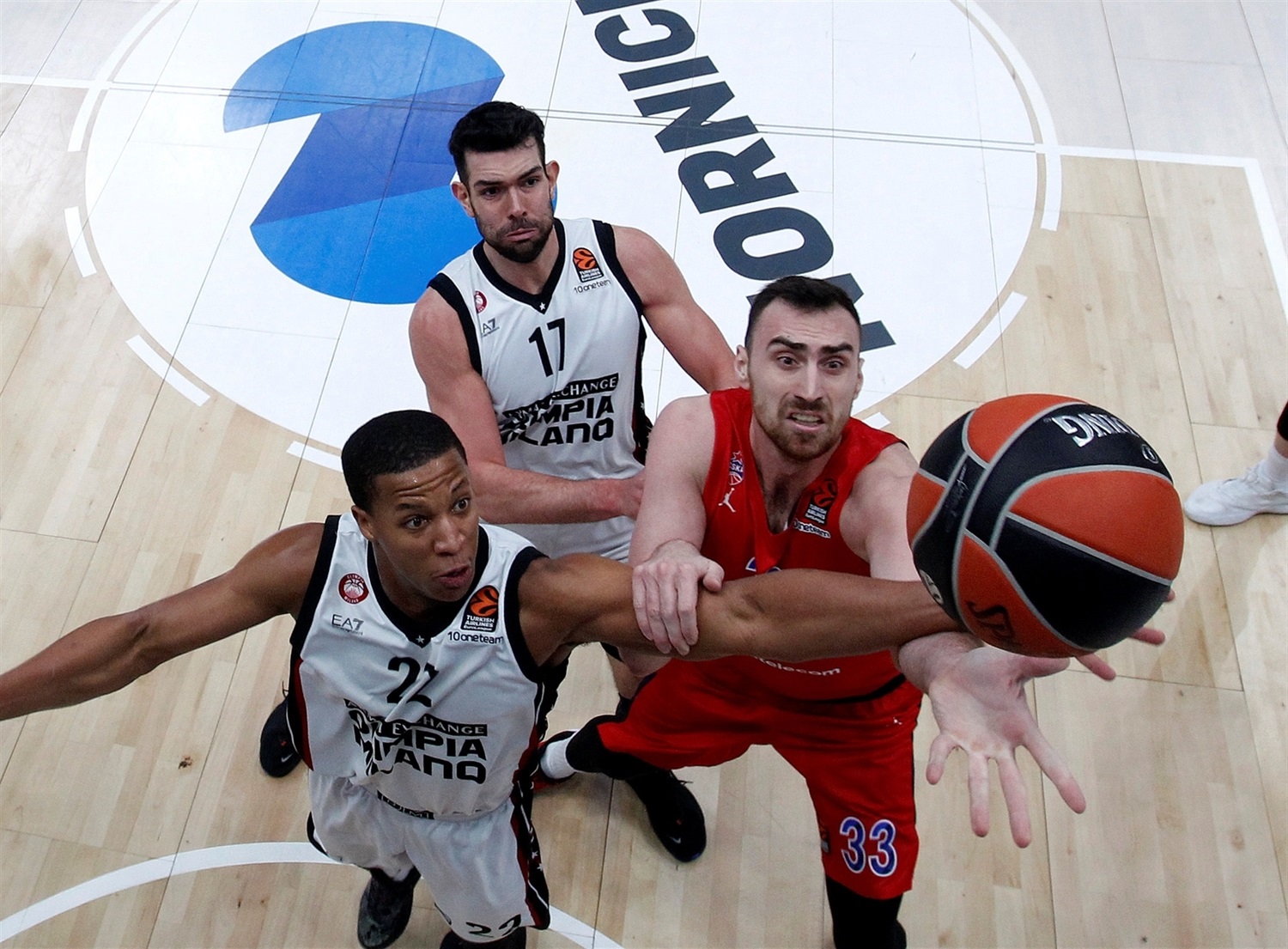 Round 22 will be remembered for making abundantly clear just how tight the playoffs race is becoming. At the top of the standings, Real blasted host ALBA on Thursday to match Barcelona with 16 wins after the latter fell at UNICS, which joined a four-way tie four fourth place at 12-7. Two other teams in that tie, Olympiacos, and Zenit, lost on Thursday, as did CSKA on Friday to a historically stingy defense by Milan, which took over sole possession of third place at 13-6. Also, on Friday, defending champ Efes needed a last-second game-winner to cling to the eighth and final playoff spot with a 10-10 record, tied on victories with 10-11 Monaco after its road win in St Petersburg the night before. Meanwhile, Fenerbahce (9-10) erased a 17-point deficit to beat Zalgiris and tie on victories with Bayern and ASVEL, who downed Baskonia and Zvezda, respectively. Right behind them is Maccabi (8-11), which ended an eight-game losing streak by beating Olympiacos, leaving ten teams between fourth and 13th place, sitting just four victories apart.

In a battle of powerhouses, AX Armani Exchange Milan defended as well as any team this century on CSKA Moscow’s court to defeat the hosts 57-67 and retain sole possession of third place in the standings. Milan took its record up to 13-6, including 2-0 against CSKA, which dropped to 12-8. Devon Hall and Troy Daniels paced the winners with 13 points apiece. Kyle Hines added 12 for Milan. Iffe Lundberg led CSKA with 15 points while Toko Shengelia added 13. Giampaolo Ricci and Troy Daniels each struck from downtown twice in the first quarter to help Milan take a 10-23 advantage after 10 minutes. Marius Grigonis and Lundberg stepped up for CSKA, bringing their team within 33-34, but Trey Kell and Hines restored a 35-40 Milan lead at halftime. Hines and Kell fueled a 0-10 run that broke the game open, 46-62, early in the fourth quarter, and Milan did not find problems after that in cruising to a big road victory.

A last-gasp three-pointer from Adrien Moerman gave Anadolu Efes Istanbul a thrilling 82-81 victory over Panathinaikos OPAP Athens on Friday night. It was a close game throughout, as Panathinaikos unleashed a flurry of three-point shooting to lead 39-42 at the break. The third quarter saw a series of lead changes, and it was 65-62 heading into the last ten minutes. Panathinaikos rallied to hold a 73-76 edge midway through the fourth, and it was a nail-biting finish until Moerman struck from deep with 2 seconds remaining. Vasilije Micic led Efes with 20 points but missed all 7 of his three-point attempts. Moerman contributed 15 points, five rebounds, two assists, and two blocked shots. Bryant Dunston scored 14, Shane Larkin had 11, and Krunoslav Simon netted 10. Nemanja Nedovic paced Panathinaikos with 20 points, while Daryl Macon Jr. scored 17 and Okaro White added 15. Efes improves to 10-10 to reclaim a playoff place, and Panathinaikos drops to 4-15.

FC Bayern Munich broke its four-game road losing streak by beating Bitci Baskonia Vitoria-Gasteiz 77-84 at Buesa Arena on Friday. Bayern improved to 9-11 in the standings while Baskonia dropped to 7-13. Othello Hunter, Corey Walden, and Augustine Rubit led the winners with 17 points apiece, and DeShaun Thomas added 13. Wade Baldwin led Baskonia with 23 points. Simone Fontecchio and Matt Costello each added 12, while Tadas Sedekerskis had 11 for the hosts. Sedekerskis shined early to give Baskonia a 15-6 lead, but Thomas and Hunter allowed Bayern to get within 17-16 after 10 minutes. Nick Weiler-Babb, Walden, and Rubit fueled a mammoth 0-17 run that gave the guests a 33-42 lead at halftime. Vladimir Lucic and Hunter took over after the break, but Baldwin kept the hosts within 71-73 midway through the fourth quarter, before Hunter and Walden made the difference down the stretch.

LDLC ASVEL Villeurbanne picked up an important victory in its fight for the playoffs as it knocked off Crvena Zvezda mts Belgrade 69-67 at home. ASVEL had dropped six of its last seven games but grabbed the win to improve to 9-11 – including 7-4 at the Astroballe. Zvezda gained control early with a 4-17 run to pull ahead early in the second quarter. Paul Lacombe inspired a comeback, and ASVEL nosed ahead in the third quarter. The game went back and forth the rest of the way until Chris Jones hit the game-winning layup with 26 seconds to play. Jones and Lacombe both scored 17 points to pace ASVEL, which was playing without leading scorer Elie Okobo. Ognjen Dobric poured in 20 points, and Aaron White scored 12 points for Zvezda, which fell to 7-12 after its fourth loss in the last five games. The Serbian champ was playing its first EuroLeague game since December 30 and its first game overall since an Adriatic League game on January 2.