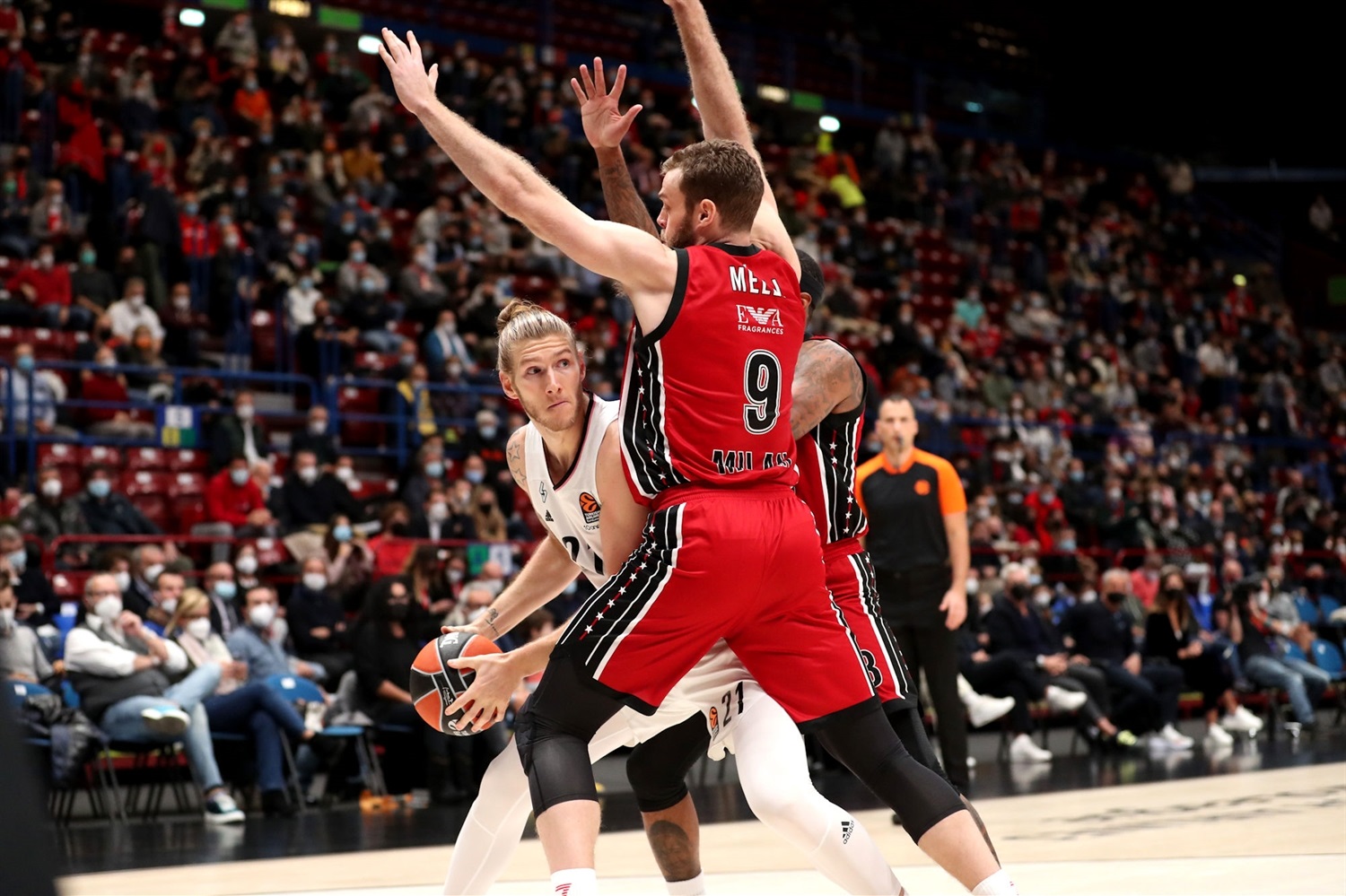 On a night that saw all five games decided in the final minutes, Anadolu Efes Istanbul and FC Bayern Munich captured their first season wins. At the same time, AX Armani Exchange Milan rallied to remain undefeated. As has been the theme this season, home courts were protected, with Bayern’s win in Kaunas the only victory for a visiting team among Thursday’s five games. Maccabi Playtika Tel Aviv survived a late rally to beat Panathinaikos OPAP Athens, and Real Madrid held off Fenerbahce Beko Istanbul at the buzzer. Thursday’s five games were decided by a total of 11 points. Four more games wrap up Round 5 on Friday, with FC Barcelona looking to join Milan at 5-0 in a special game that will see the club celebrate its 2010 EuroLeague crown. The head coach of Friday’s opponent, Zenit St Petersburg’s Xavi Pascual, guided Barcelona to that historic feat.

Reigning Turkish Airlines EuroLeague champion Anadolu Efes Istanbul grabbed its first win of the season by edging UNICS Kazan 71-68 at home on Thursday to snap a four-game losing streak. Both teams now have 1-4 records in the standings. Rodrigue Beaubois and Elijah Bryant led the winners with 14 points apiece, Tibor Pleiss added 12, and Adrien Moerman had 10 – all in the fourth quarter – and nine rebounds for Efes. Lorenzo Brown and Isaiah Canaan paced UNICS with 16 points apiece, and Mario Hezonja added 13 for the visitors. Lorenzo Brown took over in the first quarter and got help from John Brown and Tonye Jekiri to give UNICS an 18-22 lead after 10 minutes. Shane Larkin rescued Efes, but Hezonja led a 0-11 run that allowed the visitors to keep a 32-37 edge at halftime. Beaubois struck from downtown to put Efes in charge, 44-3, but Hezonja and Canaan helped UNICS to a 47-51 margin after 30 minutes. Bryant, Beaubois, and Moerman each hit a triple to put Efes ahead, 62-58, with 4 minutes left, and Efes never looked back.

FC Bayern Munich finally tasted the sweetness of a Turkish Airlines EuroLeague victory by defeating Zalgiris Kaunas 73-75 at Zalgirio Arena on Thursday night. The visitors had a slow start, struggling on offense and trailing 39-23 late in the second quarter. But, after the break, Bayern switched to a very different version of itself and managed to tie it, 52-52, after 29 minutes. Seven points in a row by Darrun Hilliard midway through the fourth quarter gave the visitors a short lead, which DeShaun Thomas and Vladimir Lucic confirmed with key baskets and free throws in crunch time. Bayern, whose record improved to 1-4, was led by Lucic, who posted 17 points, four rebounds, three steals, and eight fouls drawn in his first EuroLeague appearance this season. Thomas followed with 15 points, Hilliard chipped in 14, and Corey Walden contributed 11 for the winners. Lukas Lekavicius paced Zalgiris with 17 points and was well accompanied by Josh Nebo, who posted a double-double of 12 points and 13 boards. Mantas Kalnietis and Niels Giffey went for 11 points apiece in the losing effort.

Maccabi Playtika Tel Aviv narrowly avoided a massive meltdown as it held off Panathinaikos OPAP Athens for a 77-73 home victory on Thursday at Menora Mivtachim Arena. Maccabi controlled most of the game and built a 20-point lead with 6 minutes left before Panathinaikos charged back within 2 points with 8 seconds left. Scottie Wilbekin hit two free throws with 7.2 seconds left to secure the win, which gave Maccabi a 3-2 record. James Nunnally scored 16 of his 18 points in the first half to pace the winners, while Wilbekin finished with 16 points, and Derrick Williams added 11. Panathinaikos drained six three-pointers in the fourth quarter to make it a game, but the hole was too deep, and the Greens dropped to 1-4. Daryl Macon Jr. tallied 17 points in the loss, Ioannis Papapetrou had 15, Okaro White 14, Nemanja Nedovic finished with 13, and Georgios Papagiannis chipped in 6 points and 12 rebounds.

AX Armani Exchange Milan stayed perfect in thrilling fashion by overcoming LDLC ASVEL Villeurbanne 73-72 in an exciting battle that went to the final shot at Mediolanum Forum. ASVEL dominated the first half, leading 26-40 at the break and 26-42 at the start of the third quarter. But Milan battled back with a 14-2 run and kept pushing to tie it up 51-51 at the end of the third. The final quarter was back and forth until the last minute when Devon Hall struck a triple for Milan before David Lighty, and Charles Kahudi missed on the final possession for ASVEL. Shavon Shields paced Milan with 15 points, five rebounds, and five assists. Nicolo Melli added 14 points, Malcolm Delaney scored 12, and Giampaolo Ricci 10 for the winners. Elie Okobo had a fantastic game for ASVEL, scoring 25 points, but Chris Jones was the only other ASVEL player in double digits, with 12 points.

Real Madrid remained undefeated at home after edging Fenerbahce Beko Istanbul 70-69 in the Spanish capital on Thursday in a thriller that came down to the final shot. Real improved to 4-1 in the standings while Fenerbahce dropped to 2-3. Vincent Poirier became the game’s hero with the go-ahead free throws with 10.7 seconds left and set a Real club record with 17 rebounds. Fabien Causeur added 16 points while Thomas Heurtel had 10 for Real, which was without Edy Tavares and Sergio Llull. Tavares missed the game to be with his wife at the birth of their child. Nando De Colo led Fenerbahce with 11 points and Jan Vesely had 10. Without Tavares, Fenerbahce got its big men involved early in the game, as Achille Polonara, Vesely, and Ahmet Duverioglu gave the visitors a 10-15 lead after 10 minutes. An outstanding Achille Polonara helped Fenerbahce make it a double-digit game, 20-30. Fabien Causeur struck three times from beyond the arc to bring Real back to life, 35-41, at halftime. Causeur kept pushing Real and got help from Carlos Alocen and Rudy Fernandez to get the hosts closer, 50-52, after 30 minutes. De Colo gave Fenerbahce a 66-69 lead in the final minute, but Causeur scored in penetration, Poirier added free throws, and Real held on.