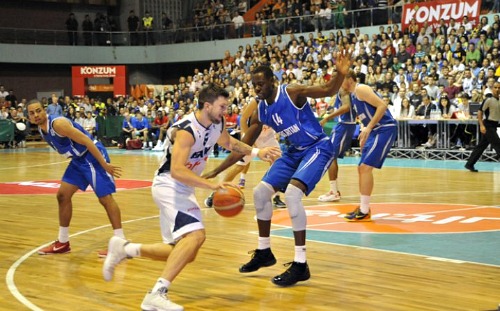 After five days of exciting action in the Eurobasket 2015 second qualifying round, we have our first few teams who have booked their tickets, signed and sealed. Latvia’s impeccable 5-0 record allows them to cruise on through, while Bosnia and Herzegovina managed a 3-0 slate in their smaller three-team group to secure their berth as well.  Thanks to Israel’s 83-60 win over the Netherlands, they managed to secure first place in Group B and thus are moving on.

Mirza Teletovic once again carried Bosnia and Herzegovina to victory, this time it was against the United Kingdom. He poured in 25 points to lead his team in their 74-68 win. At 0-4 the United Kingdom is now out of the running. There were no big leads in this game, with the Brits keeping the Bosnian within reach. They even managed to trail just by two points heading into the final period. Bosnia and Herzegovina stepped up their defense in the final minutes of the game to shut down their opponents and secured the win.

Israel’s offense has been running on all four cylinders for majority of the competition and their game against the Netherlands was no exception. They dominated the Dutch squad from the opening whistle, stomping off to a 26-5 lead after the first quarter. From there they snowballed and the Netherlands were left in their dust, 83-60.  Omri Casspi and Gal Mekel led the charge for Israel, scoring 22 and 16 points respectively.

Bulgaria fell to Montenegro 73-84, and with their 0-5 record are no longer in contention for that highly coveted Eurobasket berth. On the other hand, both Montenegro and the Netherlands are now tied at 3-2 are going to duke it out on Day 6 settle the clear second-place spot. Montenegro’s Taylor Rochestie led four other teammates in double figures with his 17-point outing. Montenegro’s advantage in the rebounding and assist categories were key factors in their victory.

Poland sealed Luxembourg’s fate with their 100-64 dominant victory, sending the visitors home to lick their wounds. Luxembourg is now at 0-5 and cannot qualify. Poland surges to a the top of the group with their 4-1 record, assuring their entrance to Eurobasket 2015. Poland built up a gap with a spirited 9-0 run in the second quarter, heading into the halftime break up  40-28. From there, the Polish team did not look back and Luxembourg was just out of the game. Szymon Szewczyk was Poland’s top scorer, piling on 17 points off the bench.

Germany pulled off a critical win over Austria 88-69, to keep their Eurobasket 2015 hopes alive. Both teams are now tied with 3-2 records. But Austria needs to contend with the best team in the group, Poland, while Germany is set to do battle with the nothing-to-gain Luxembourg team on the final day. The Germans used a solid 26-6 fourth quarter to crush Austria into submission. Dennis Schroeder had a good all-around game for the Germany, scoring 24 points while handing out six assists.

Denmark falls for the fifth time in as many contests in this competition, as FYR Macedonia rolls passed them with a 80-46 victory. FYR Macedonia is tied with Belgium at 4-1 with the best records in the group. They are set to face Belarus (2-3), while Belgium meets Denmark on Day 6. The Macedonian squad leaned on their defensive intensity to shut down their opponents, collecting eight steals and four blocks for the night. Richard Hendrix led the victors with a strong double-double performance, putting up 15 points on the scoreboard while cleaning up the glass with 12 rebounds.

Belgium secured their seat at the Eurobasket 2015 with a key win over Belarus, 99-73. Their win guaranteed at least a second-place finish in the group standings with a 4-1 record. Belarus’ heartbreaking loss was actually a do-or-die situation for them. At 2-3 they cannot contest for any slot being awarded a berth at the tournament. Matt Lojeski led the Belgian team with a game-high 28 points.

Georgia maximized their homecourt advantage as they cruised to an important win against group rivals Hungary, 79-59. With the win Georgia kept their hopes alive, tying Hungary with an identical 3-2 record. Timing of the win was key as they face the already eliminated Portugal (0-5), while Hungary has to contend with group leader Czech Republic on Day 6. Portugal could not find an answer for Tornike Shengelia, who torched them for 26 points and eight rebounds. A 15-point lead at the half was more than enough to carry Georgia to victory against the struggling visiting team.

The Czech Republic came away with an upset, 75-61, to keep Portugal winless in the competition. This is the fourth straight win for the Czechs, after faltering in their first game (vs. Georgia). Claudio Fonseca scored 22 points for Portugal, but it was not enough to overcome the counter-offense of their opponents.  Tomas Satoransky led the Czech squad with 18 points, seven rebounds, and five assists.

Latvia has been stellar in these second qualifying rounds for Eurobasket 2015 and at 5-0 have the best overall record. Slovakia (0-5) was not able to put up much of a fight in their 65-89 loss to the group leaders. Peter Sedmark, to his credit, did his best to lift the Slovakian team with his 23 points, but he did not get enough support from his teammates who struggled underneath Latvia’s dominant presence in the paint. Janis Blums and Kristaps Janicenoks led Latvia with 13 points each.

Romania secured second-place position in the group with a tight 88-86 victory over Sweden. The win came of a crucial basket sank by Romania’s Adrian Gutoaia with only seconds left in the game. Romania was able to advance their position early in the contest with a 47-38 halftime lead, only for the Swedish team to erase the lead and eve tie up the contest at 86-86 late in the final period. Gutoaia’s basket was just the slight edge they needed to overcome good games from Sweden’s Joakim Kjellbom and Ludvig Hakanson, who both scored 20 points apiece.

Russia managed a win on the road against Italy, 72-68, to keep their torch for Eurobasket 2015 burning. Italy is 2-1, while Russia is now 2-2. Italy faces Switzerland on Day 6 and if they happen to lose to the Swiss, Russia will take the number one spot in the group based on tie breakers. Russia did most of their damage in the post. Anton Ponkrashov and Timofey Mozgov led the way with 22 and 20 points respectively, as they combined for 15-of-24 from two-point range.