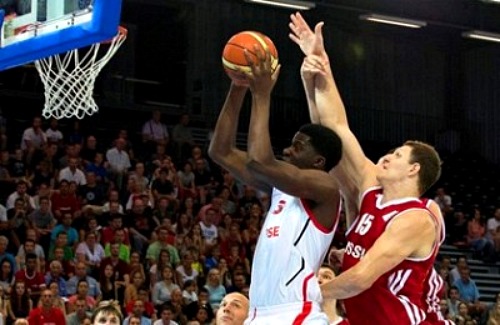 The second qualifying round for Eurobasket 2015 began this weekend. The games will run from August 10 through August 27. There are five groups composed of four teams and two groups with three. The top team from each group and the six best second place teams will qualify for Eurobasket 2015. 12 games were played and there were more than a few surprises in the first day’s action.

Iceland took control of the game early, but the squad from the U.K. fought back to tie the game up at halftime. A big 15-2 rally in the fourth period sealed the victory for Iceland in the end. They got huge games from Hakur Palsson and Martin Hermannsson who scored 24 and 22 points respectively.

The Dutch team outplayed their Bulgarian opponents from start to finish in this one, amassing a commanding 10-point advantage after the end of the first half of the game. The Netherlands lorded over the paint, while Bulgaria opted to make their plays from the outside. At the end of the day, the higher volume and higher percentage of Netherlands’ shot selection paid off for them in their dominant win. Arvin Slagter was Netherlands’ top performer with 18 points.

The teams needed an extra period to settle this game. Montenegro overcame an explosive 28-point game by Israel’s Omri Casspi in this nail-biting affair. Both teams fought hard throughout regulation which saw them exchange leads a total of nine times. Unfortunately, Casspi’s three-point shot as overtime came to a close did not find its mark and Montenegro was able to capitalize on the split free throws of Sead Sehovic in the dying seconds of the game.

Austria took advantage of a strong first half to carry them. They built enough momentum to out last Luxembourg in the last two quarters as they strode to an easy win.

It was a game that went down the wire and in the end the Polish team was able to win the game thanks to some key free-throw shots with less than 20 seconds remaining. Every time Poland would build a lead, the Germans would come back at them with an attack and keep the game within striking distance. Poland was led by Adam Waczynski who finished with a game-high 19 points. Aaron Cel was also solid with a 10-10 double-double for his team.

This was another thrilling game that went into overtime. Macedonia was lifted by a late trey from Marko Simonovski to edge Belgium in the tightly contested game. Belgium’s starters were not on point, but the reserves came to play and kept the game close and even established 13-point lead by halftime. Macedonia rallied in the third and both squads traded baskets amid tight defense in the final and extra periods. Bojan Trajkovski and Vojdan Stojanovski led Macedonia with 16 points apiece.

Belarus ran away with this game from the get go and the Danes were outclassed in this encounter. Good ball distribution and control of the boards were the keys to the win by Belarus. Denmark could not find an answer to Belarus’ Aliaksandr Pustahvar who punished them with 24 points and 11 rebounds.

Here are the results from the games in Groups E-G: