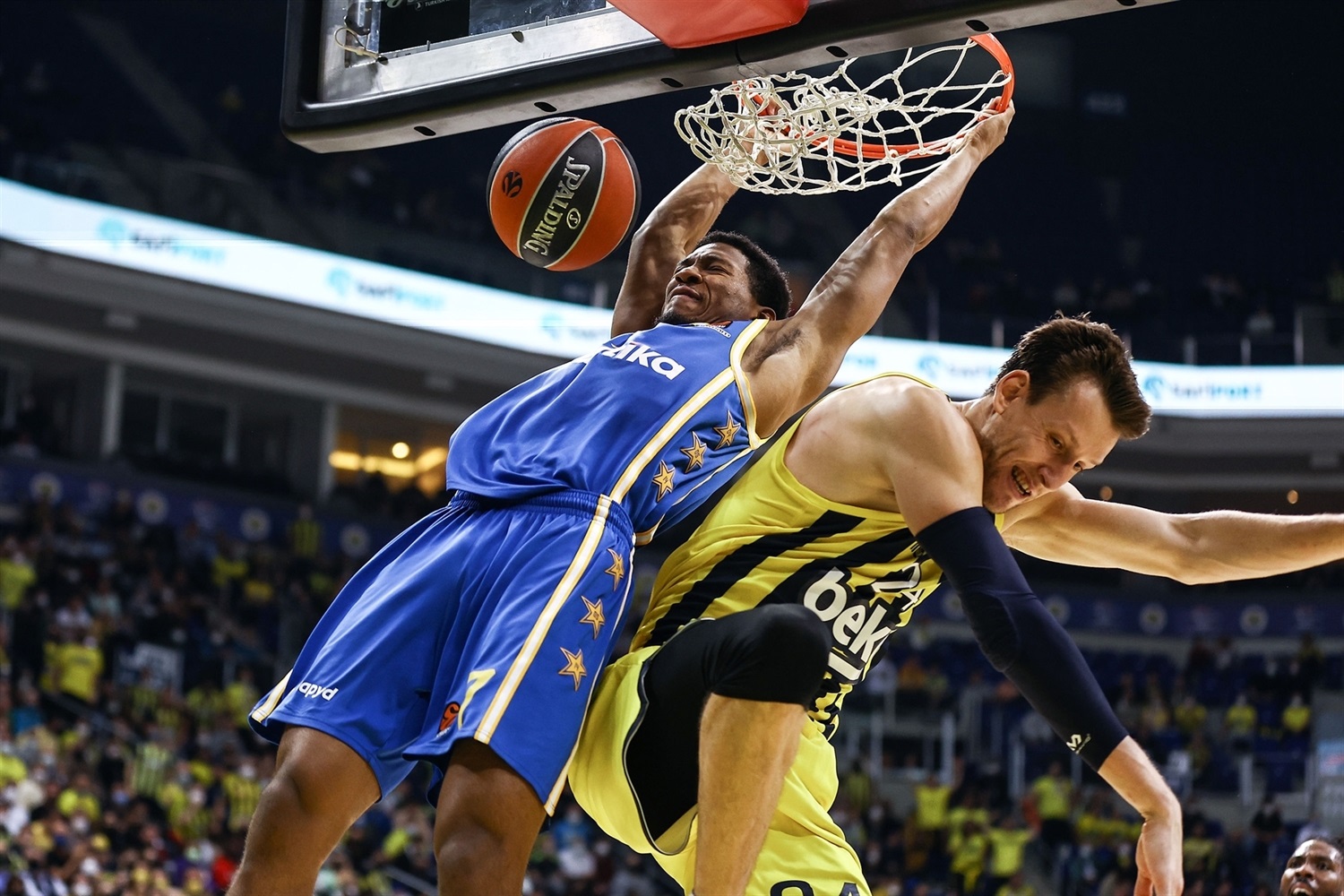 The two-round week for December began with a five-game son Tuesday, which saw four of them turn into blowouts for the hosts. Anadolu Efes, Fenerbahce, Milan, and Real Madrid all cruised to double-digit margins of victory at home. Only Fenerbahce, which bested Maccabi, defeated a team with a better record than it. League-leading Barcelona protected the top spot with a win in Belgrade. Round 15 resumes on Wednesday with four games, including a clash of Russian clubs in CSKA Moscow against UNICS Kazan and Sasa Obradovic’s first game as Monaco’s head coach when they visit Zalgiris.

Reigning champion Anadolu Efes Istanbul returned to its winning ways by knocking off Bitci Baskonia Vitoria-Gasteiz 87-72 at home on Tuesday night. Efes broke the game open with a 12-0 run spanning the third and fourth quarters and gave up just 10 points in the final frame to snap a two-game losing streak and improve to 7-8. Last season’s Most Valuable Player Vasilije Micic paced Efes with 24 points while his dynamic backcourt partner Shane Larkin collected 16 points, seven rebounds, four assists, and two steals. Tibor Pleiss also stepped up with 17 points, and Adrien Moerman chipped in 15 points. Baskonia failed to build on its big win last week against LDLC ASVEL Villeurbanne and dropped to 5-10 with its eighth loss in the last nine games. Jayson Granger and Simone Fontecchio scored 17 points each in the loss, and Wade Baldwin IV added 10 points.

Fenerbahce Beko Istanbul grabbed its third consecutive win by topping Maccabi Playtika Tel Aviv 90-79 at home on Tuesday. Fenerbahce improved to 6-9 in the Turkish Airlines EuroLeague Regular Season standings, while Maccabi dropped its fifth straight game to fall to 7-8. Devin Booker led the winners with 22 points, and Nando De Colo added 21. James Nunnally paced Maccabi with 18 points. Scottie Wilbekin added 14, Keenan Evans 13, Derrick Williams 10, and Ante Zizic pulled down 11 rebounds for the visitors. Fenerbahce led 42-37 at the break before Pierria Henry scored 6 points in a 9-0 run that boosted his team’s lead to 59-43. It was 70-51 after 30 minutes, but Maccabi rallied within 79-74. That’s when Booker and De Colo stepped up in crunch time to seal the outcome.

FC Barcelona held on late to beat Crvena Zvezda mts Belgrade 69-76 on Tuesday night at Aleksandar Nikolic Hall for its seventh consecutive victory. The league-leaders improved to 13-2 on the season and dropped Zvezda to 6-9. Barcelona led through the second half, but a late Zvezda charge got the hosts within 3 with the ball in the final minutes. Nikola Mirotic and Kyle Kuric came through late to secure the victory. Nigel Hayes-Davis led the way for Barcelona with 14 points, and eight rebounds, Rolands Smits and Sertac Sanli scored 11 points apiece, and Mirotic tallied 10 points and seven boards. Luka Mitrovic and Nikola Kalinic scored 15 points each for Zvezda, and Nate Wolters added 11.

AX Armani Exchange Milan continued its resurgence by crushing Panathinaikos OPAP Athens 75-54 on Tuesday. The first half was closely contested, with Panathinaikos leading for long stretches of play, but Milan surged clear with a 16-0 run bridging the second and third quarters and never looked back from that moment. Devon Hall led the scoring with 19 points, while Kyle Hines added 14 points, and Sergio Rodriguez controlled the rhythm with 6 points and nine assists. Daryl Macon was the only visiting player with more than 7 points, scoring 14. Milan, which had previously lost four consecutive games, has now won two straight and improved to 10-5. Panathinaikos remains winless on the road at 4-11.

Real Madrid remained undefeated at home by downing ALBA Berlin 87-64 in the Spanish capital on Tuesday. Real improved to 12-3 in the standings and 8-0 in front of its fans. ALBA dropped to 5-10. Walter Tavares led the winners with 17 points. Rudy Fernandez added 14, and Anthony Randolph had 13 for Real. Johannes Thiemann paced ALBA with 11 points, and Louis Olinde added 10. Real led by three at the end of the first quarter before Sergio Llull and Fernandez led a 24-10 second quarter that made it 43-26 at halftime, and Real cruised the rest of the way.