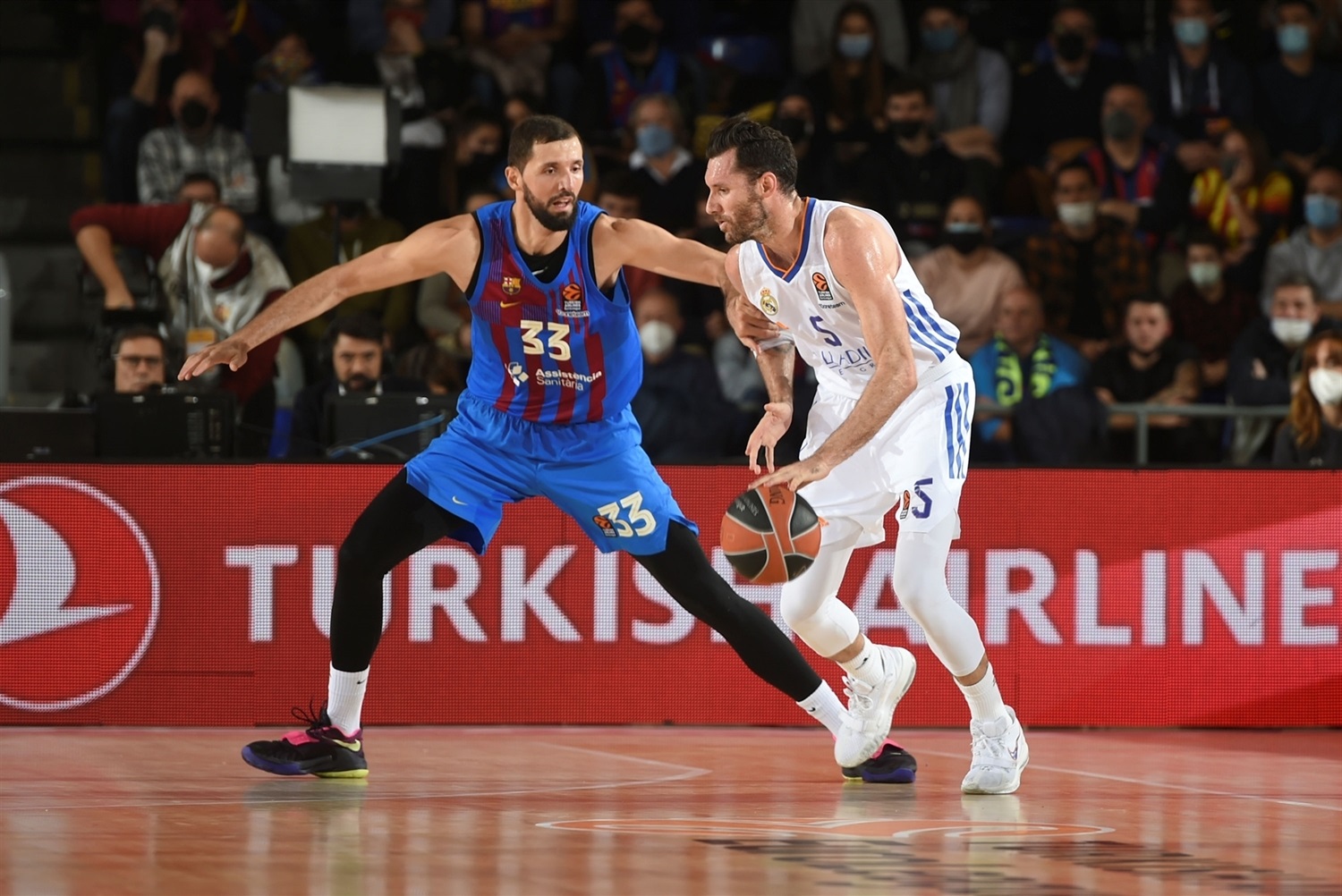 Barcelona (12-2) put its stamp on first place by acing the first El Clásico of the season, 93-82, over archrival Real (11-3), which fell to second. Tied for third place at 9-5 now are Round 14 winners CSKA and Milan, who won at Zalgiris (3-11) and Monaco (5-9), respectively, while Olympiacos (9-5) fell at Zvezda (6-8). UNICS (8-6) moved up into a sixth-place tie with Zenit (8-6) by ambushing Maccabi (7-7), which is now tied for the eighth playoff spot with two teams: Bayern, which downed visiting Efes (6-8), and ASVEL, which lost at Baskonia (5-9). The remaining winner was the round’s first one, Fenerbahce (5-9), which won at Zenit. Four wins now separate 14 teams between third and 16th place, promising a lot of jockeying to come as the schedule moves towards its midway point in a couple of weeks.

CSKA Moscow used dominant defense and a resurgent Nikola Milutinov to down host Zalgiris Kaunas 51-73 on Friday night at the Zalgirio Arena. CSKA won its fourth straight game, improving to a 9-5 record and a share of third place. Zalgiris had its three-game home winning streak snapped, dropping to 3-11. After a tight first half, CSKA opened the third quarter with a 0-7 run and added a 2-13 spurt to take an 18-point margin and maintain control of the game on the way to victory. Nikola Milutinov paced CSKA with a double-double of 19 points plus 12 rebounds, while Alexey Shved scored 17 points in the winning effort. For Zalgiris, which was held to a club-record low of 51 points in a EuroLeague home game, Josh Nebo was the only double-digit scorer, with 11 points, and added seven rebounds.

AX Armani Exchange Milan can breathe a sigh of relief after fending off AS Monaco 65-71 on the road to snap a four-game losing streak. Milan took control of the game with a 2-13 close to the first quarter and even built a 21-point cushion early in the fourth. The guests struggled to close out the game, though, allowing Monaco to get within 6 points in the closing minutes before finally winning to raise their record to 9-5 for a share of third place. Sergio Rodriguez paced Milan with 13 points to go with six rebounds and four assists. Kyle Hines picked up 11 points and six rebounds, while Malcolm Delaney scored 10 points. Paris Lee led Monaco with 19 points, Danilo Andjusic chipped in 12, and Dwayne Bacon added 10. But it was not enough as Monaco dropped its fifth straight game for a 5-9 record. Monaco star Mike James played just 2:42 minutes as head coach Zvezda Mitrovic pulled him for the rest of the game for precautionary reasons after James had not participated in pregame warmups.

Panathinaikos OPAP Athens strung together its second consecutive home win by pulling way from ALBA Berlin 82-67 at OAKA on Friday night. Both teams enjoyed nine-point leads in the first half and were tied 43-43 after 20 minutes, but the hosts stepped up on defense after the break, allowing ALBA just 24 points the rest of the way to seal the outcome midway through the last period. Daryl Macon led the winners with a terrific double-double of 20 points and a career-high 11 assists. Leonidas Kaselakis followed his personal best of 17 points on 4-for-4 shooting from behind the arc. Howard Sant-Roos scored 16 points, and Georgios Papagiannis posted 14, 10 rebounds, and four blocks for the winners, who improved to 4-8. ALBA Berlin dropped to 5-9 despite Markus Eriksson, Oscar Da Silva, and Jaleen Smith going for 18, 13, and 11 points, respectively.

In a direct battle to lead the standings, FC Barcelona took the first clásico of the season by downing Real Madrid 93-80 at Palau Blaugrana on Friday to take sole possession of the first place in the Turkish Airlines EuroLeague. Barcelona is now atop the table with a 12-2 record, with Real right behind at 11-3. Nikola Mirotic led the winners with 31 points and ten rebounds. Brandon Davies and Nicolas Laprovittola added 16 each, while Rokas Jokubaitis had 12 for Barca. Fabien Causeur and Thomas Heurtel led Real with 11 points apiece. Sergio Llull, Walter Tavares, and Nigel Williams-Goss each had 10 for the guests. Mirotic had 13 first-quarter points, getting help from Davies and Jokubaitis for a 24-19 Barca lead after 10 minutes. Davies and Jokubaitis allowed the hosts to extend their margin to 47-35, but Rudy Fernandez and Llull got Real within 51-42 at the break. Laprovittola boosted Barca’s lead to 64-51, but Williams-Goss helped Real get within 67-58 after 30 minutes. Real kept its chances open until the final 4 minutes, but then Mirotic made the difference, sealing the outcome in style.