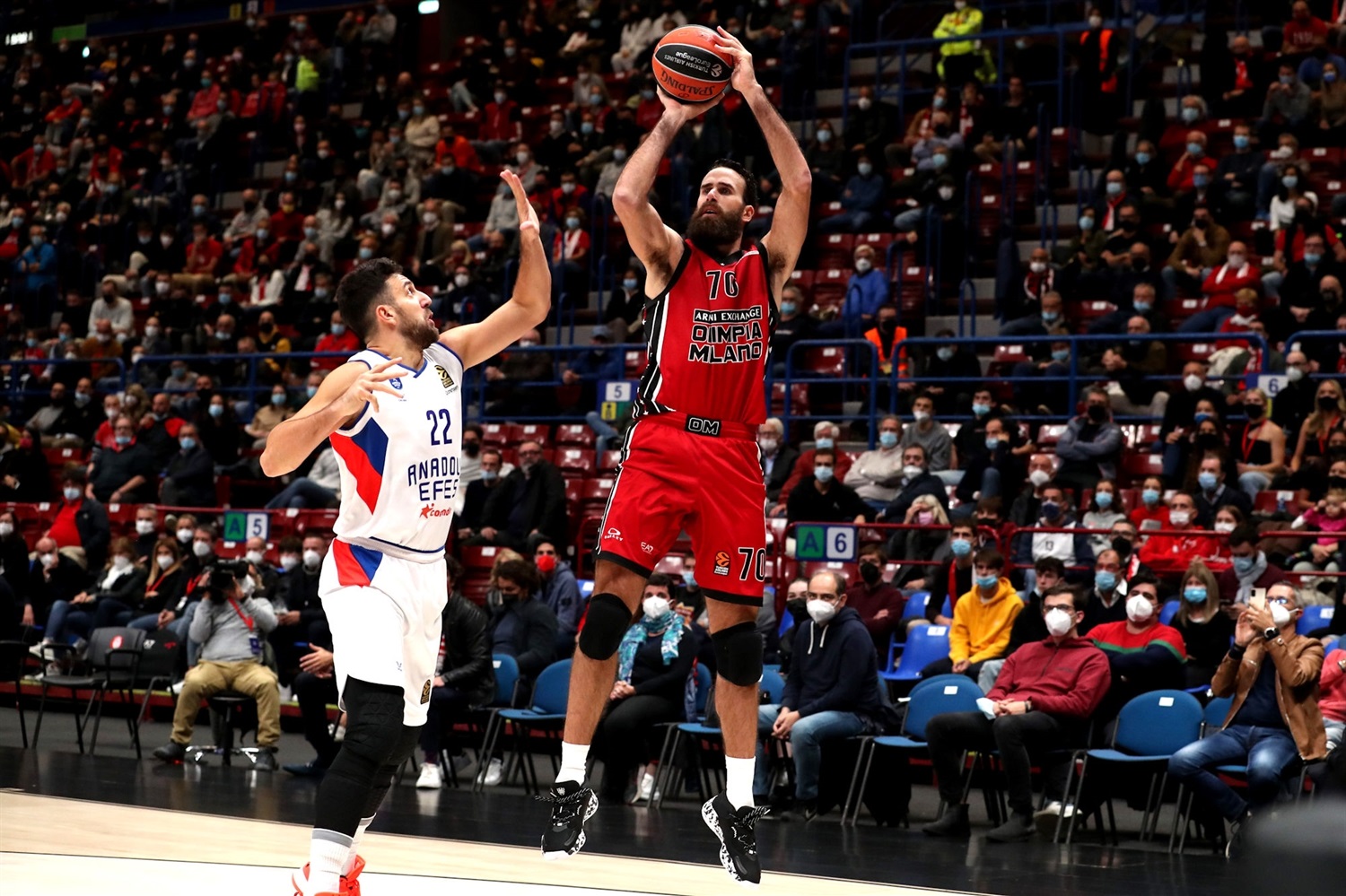 Olympiacos, CSKA, Zenit, and Real stayed on the heels of the leaders with home wins to reach 3-1 and were joined by LDLC ASVEL Villeurbanne, whose first loss came at the hands of visiting Maccabi. Fenerbahce and Baskonia joined Maccabi in rising to 2-2, where they are tied with Round 4 losers Monaco and Crvena Zvezda. Six more unsuccessful Thursday and Friday teams follow, ALBA, UNICS, and Panathinaikos at 1-3 each while Bayern, Efes, and Zalgiris continue searching for first victories.

In a hard-fought battle that saw several lead changes and ties, CSKA Moscow prevailed over visiting Crvena Zvezda mts Belgrade 78-76 in the Russian capital on Friday night. The visitors led 69-71 late in the last period, but CSKA prevented Crvena Zvezda from scoring for almost 4 minutes, and a 9-0 run led by Alexey Shved and Iffe Lundger put the game on ice. CSKA collected its third straight win to improve to 3-1, as Crvena Zvezda dropped to 2-2. Will Clyburn was CSKA’s top scorer with 18 points, with Shved posting 16 points, four rebounds, and five assists for a PIR of 25, as Johannes Voigtmann and Joel Bolomboy had 12 and 11 points, respectively. Nate Wolters led the visitors with 16 points, while Ognjen Kuzmic contributed 14 points and seven boards. Nikola Kalinic, Ognjen Dobric, and Nikola Ivanovic made 11, 10, and 10, respectively, in defeat.

FC Barcelona remained undefeated in a physical game that went to overtime by edging AS Monaco 81-85 at Salle Gaston Medecin. Will Thomas scored 9 points in the first quarter and got help from Donta Hall and Donatas Motiejunas to give Monaco a double-digit margin, 22-12, after 10 minutes. Nick Calathes and Brandon Davies stepped up for Barcelona, bringing the guests within 35-31 at halftime. Nico Laprovittola, Davies, Nigel Hayes-Davis, and Rolands Smits each struck from beyond the arc to put Barcelona ahead, 52-54, late in the third quarter. Monaco led 74-71 with 20.1 seconds left, but Davies followed a layup with a wild put-back basket to force overtime, 75-75, and Calathes, Davies, and Cory Higgins made the difference in the extra period. Davies led the winners with 27 points and ten rebounds. Nikola Mirotic added 14 points, while Laprovittola and Calathes each added 12 for Barcelona. Calathes also grabbed 11 rebounds for a double-double. Mike James led Monaco with 16 points. Thomas added 15, and Leo Westermann scored 10. Barcelona improved to 4-0 while Monaco dropped to 2-2.

Olympiacos Piraeus shook off a slow start and ended up racing away from Zalgiris Kaunas for an impressive 83-68 home victory. Two days after losing in overtime to FC Barcelona, Olympiacos fell behind by 14 points midway through the second quarter. But the Reds tied the game in the third quarter en route to a 27-10 period and ended up improving their record to 3-1. Kostas Sloukas paced four Olympiacos players in double figures with 17 points, while Giannoulis Larentzakis scored 13 points, Sasha Vezenkov 12, and Kostas Papanikolaou had 10. Zalgiris remained winless at 0-4 despite Emmanual Mudiay tallying 19 points with four assists while Arturuas Milaknis scored 14 points and Josh Nebo added 12.

AX Armani Exchange Milan continued its perfect start to the season by beating reigning Turkish Airlines EuroLeague champion Anadolu Efes Istanbul 75-71 at the Mediolanum Forum on Friday night. The victory improved Milan’s record to 4-0, while Efes dropped to 0-4. Milan took control of the game and opened a double-digit lead thanks to a 21-2 run that bridged the second and third quarters. The hosts kept Efes at bay until midway through the fourth quarter when the visitors started their rally and got within 63-60, but never closer than that. Malcolm Delaney paced Milan with 16 points and five assists. Devon Hall netted 13 points, Shavon Shields had 12, and Luigi Datome scored 11, with each player hitting three triples apiece. Vasilije Micic scored 15 of his 17 points in the first 15 minutes and had five assists for the night. Shane Larkin had 13 points plus nine rebounds, Adrien Moerman scored 12, and Filip Petrusev 10 points in the loss.

In a battle of classic powerhouses, Real Madrid remained undefeated at home by topping Panathinaikos OPAP Athens 88-65 in the Spanish capital on Friday. Alberto Abalde and Sergio Llull each struck from downtown late in the first quarter to give Real a double-digit lead, 30-18, after 10 minutes. Abalde kept pacing Real, getting help from Thomas Heurtel to keep the hosts way ahead, 42-30, at halftime. Daryl Macon stepped up for Panathinaikos, but Walter Tavares and Fabien Causeur gave Los Blancos a 62-46 margin late in the third quarter. Nothing changed after that, as Real cruised to a well-deserved win. Tavares led the winners with 17 points and nine rebounds. Abalde added 16 points, Guerschon Yabusele had 14, and Vincent Poirier 10 for Real. Macon led Panathinaikos with 18 points, while Georgios Papagiannis added 12 and Kendrick Perry 10. Real improved to 3-1 while Panathinaikos dropped to 1-3.