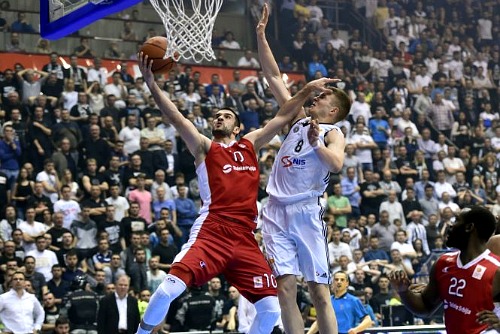 The Adriatic League semifinal series between Serbian arch-rivals, Crvena Zvezda “Red Star” Telekom Beograd and BC Partizan NiS Beograd is now in the books. Red Star claimed a Game 4 victory, 73-81, to move on to the league Finals. They now await the victor of the series between Montenegrin club KK Buducnost Voli Podgorica and Croatian team KK Cedevita Zagreb, which is headed to a fifth and final decisive game on April 22.

Crvena Zvezda made league history this regular season with the awe-inspiring winning streak. They ended with an impressive 24-2 record and were a dominant force for many weeks. Now, the red and white shirts have one last series of games that they need to put away in order to claim the highly coveted league crown. So far, so good. Red Star displayed some excellent team play throughout this season and their Game 4 win over Partizan was no exception.

As expected from any Serbian derby game, this one was filled with a lot of excitement which fueled by the cheering fans at Belgrade. Partizan greeted their guests offense that sent a message that they meant business in this do-or-die game. They came out with a quick 6-0 run to start the action, but Red Star would not be thrown into a deep hole. The high scoring first quarter ended with Partizan managing stay ahead 24-22. Defenses were strengthened on both sides during the second frame, but it was Crvena Zvezda that seized the initiative and ended the first half with a slight 36-38 lead.

It was a tight first half, but Red Star wanted to put this game away so that they could focus on their next challenge. They looked to their American import, Marcus Williams and he delivered, in spades. Williams exploded for his team to score 17 of his team-high 19 points in the second half, anchoring the offense ensure that their hosts would not catch up. True to form, Red Star surged on and eventually cruised to another victory.

Williams led four other teammates in double-digit scoring. Charles Jenkins helped out with the scoring burden with 19 points of his own. Boban Marjanovic did an excellent job on the glass. He finished with a double-double, scoring 12 points and hauling 14 rebounds. Nikola Kalinic and Luka Mitrovic added 11 and 10 points, respectively.

Partizan got a huge game from Edo Muric, who put up a game-high 25 points along with seven rebounds. Unfortunately, his valiant effort was not enough to lift his team, by itself. Nikola Milutinov was his only other teammate to score in double figures with 13 points. Had the duo gotten more help from the rest of the squad then perhaps we would be reading a completely different headline today.

Now that Crvena Zvezda has put Partizan away, they look to rest up and get ready to face the winner between Buducnost and Cedevita on the 22nd. Whichever team they will face, it should prove to be an exciting Adriatic League Finals series to behold.